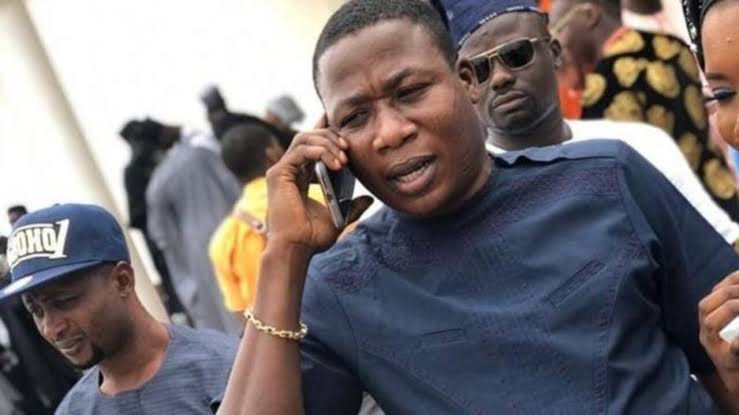 Yoruba Freedom Crusader, Sunday Adeyemo also known as Sunday Igboho has said his house was set ablaze in the early hours of Tuesday by traitors among his Yoruba ethnic group.

According to the popular Yoruba fighter who had last week given a seven-day ultimatum to the Fulani herdsmen occupying Igangan Community in Ibarapa zone of Oyo State to vacate the community, said he was surprised at the attack and the fact that some Yoruba elements are supporting the kidnappers to set his house ablaze.

According to him, he got a call from one of the two younger brothers of his living in the building that some hoodlums had arrived the area at about 3am, shooting sporadically into the air before they broke into the gate and set the building ablaze.

“My major surprise and which I did not expect is for some Yoruba people to continue to offer support to Fulani and Kidnappers. These Fulani are killing our brothers, kidnapping them and raping our women. These are condemnable actions. My effort is aimed at all of us coming together to stop these atrocities in order for peace to reign in Yorubaland. I am surprised that Yoruba people are supporting the Fulani herdsmen that they had to come here to set my house ablaze. Though I do not suspect anyone but this sort of thing cannot happen without an insiders’ support.

“I only went to Igangan because government has never come to the assistance of the people and I felt I needed to go there to help them to drive away the Fulani kidnappers from our land and make it safe. It is surprising that our Yoruba brethren would be supporting the Fulani herdsmen or why would they now come to my house to set it ablaze”.

He challenged the arsonists, describing their actions as cowardly, “If they know they want to fight me and if they believe they are courageous, why did they not come to where I live? If they know they are brave and can fight and can shoot guns, they should have come to my personal residence, at least one of them would have been caught. I would have given you evidence. Either you would get here to find their dead body or find some with broken limbs”, he said.

Igboho who said he lost valuables worth about N50million said the arsonists came in about five vehicles but none of his two brothers in the house was injured having fled when the attackers arrived.

He equally took a swipe at Senator Babafemi Ojodu, Special Adviser on Political Matters to President Muhammadu Buhari,over an alleged social media post entitled: The Sunday Igboho I knew,” claiming that he (Ojudu) had met Igboho in 2009 at the instance of Asiwaju Bola Ahmed Tinubu, Leader of the All Progressives Congress (APC) to prevail on him (Igboho) not to foment trouble in the election rerun in Ekiti scheduled for that year.  Ojudu had alleged on his Facebook page on Monday that the Peoples Democratic Party (PDP) chieftains had hired Igboho to disrupt the 2009 Governorship election rerun in Ekiti.

“I have been hearing about this man Femi Ojudu. I do not know him. He said Baba Adedibu (Chief Lamidi Adedibu, late strong man of Ibadan politics) gave me a job in 2009, but we all know Baba Adedibu died in 2008. I think he should undergo mental test. I was never close to Baba Adedibu. The only person I was close to was Senator Rasheed Ladoja and I have never betrayed him. As difficult as it was then, I never betrayed him. Ojudu said I had a meeting with him. He needs to have his head examined. Let him swear with his child that he ever had any meeting with me. When he was in power to assist? Did he assist anyone, but whatever the plan is, it will not succeed.I know they are trying to bring politics into it, but it will not succeed.”