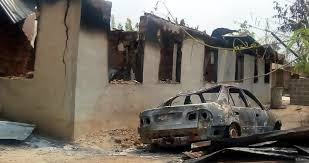 A prominent indigene of Ibarapaland and businessman, Dr. Olusola Ayandele, has taken a swipe at both the federal government and the government of Oyo state over what he described as “poor handling of security architecture particularly in Ibarapa axis of the state culminating in incessant cases of coordinated attacks against residents and loss of precious lives of innocent people”.
Ayandele’s lamentation came apparently as a reaction to the last weekend invasion of Igangan community in Ibarapa North local government area of the state in which reports had it that over 20 lives as well as property estimated to be in several millions of naira were lost. These attacks were said to have been carried out by bandits made up of unknown gunmen who had been tormenting the whole of Ibarapaland and parts of Oke-Ogun in recent times.
Dr. Ayandele said in a statement issued on Monday and made available to journalists in Ibadan by his Personal Assistant (Media), Comrade Sola Adeleke, that the frequency of such lethal attacks on the communities and the relative ease with which the invaders carry out their nefarious activities without any resistance coming from any quarters indicated that the governments at all levels had failed the Ibarapa people.
“One cannot but query the federal government over the abandonment of hapless residents in these communities. With little or nothing coming their way in terms of social amenities and dividends of democracy, our people in the whole of Ibarapaland remained calm and peaceful all this while. And painful enough, the reward for their patience and calmness is now massacre in the hands of bandits suspected to be Fulani herdsmen.
“The more annoying thing is the kind of lip service being paid by the state government whose primary responsibility is to protect the lives and property of the people. Gov. Seyi Makinde must change his tactics and go all out to put a final stop to these incessant attacks and invasion of all the affected communities as a matter of urgency. The trend has continued unabated for about 18 months now and the governor does not appear ready to arrest it.
“What is now playing out in Igangan is a declaration of war and governments owe our people a duty to unmask the attackers, stop them from wreaking further havocs and return absolute peace to the affected communities. It is only when this is done that the confidence which the residents had on both the federal and state governments would be restored.
“The last weekend incident was one attack too many as it subjected many families to gnashing of teeth on account of the losses of their loved ones as well as valuable properties which were either set ablaze or badly destroyed. The attackers also performed a sacrilegious act as they set fire on the palace of the traditional ruler of the sleepy town after killing more than 20 people. This unfortunate incident and the previous ones before it stand condemned and we call for a thorough investigation to unravel the identity of the criminals and their sponsors.
“Lastly, we are making a passionate appeal to President Muhammadu Buhari, Gov. Seyi Makinde, the Inspector General of Police as well as every other concerned stakeholders to rise up to the challenge and come up with lasting solutions to the challenges of insecurity bedeviling Igangan, Tapa, Ayete, Idere, Igbo-Ora among other communities in Ibarapaland before things get out of hand completely.” Ayandele said.