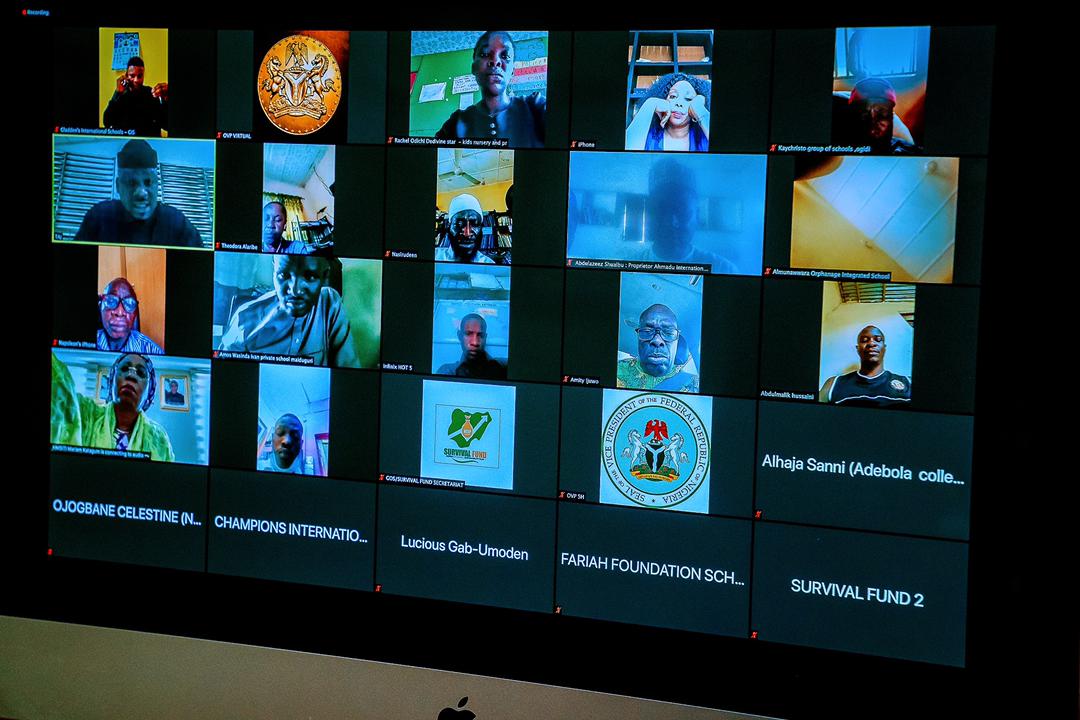 Beneficiaries of the Buhari administration’s Survival Fund from the Transportation and Education sectors have hailed the Economic Sustainability Plan (ESP) scheme, praising the President and his deputy for the success of what they described as an unprecedented, transparent, fair, and impactful programme. 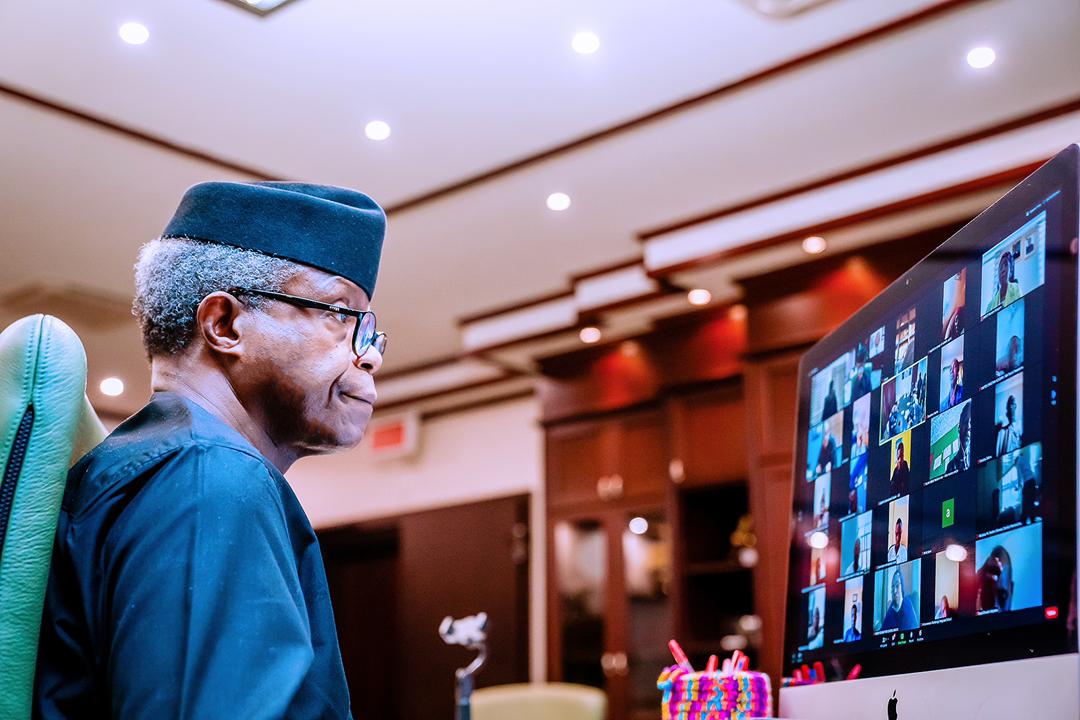 Responding during two different feedback-focused virtual interactive sessions earlier today, Vice President Yemi Osinbajo, SAN declared that the President wanted to do more, and would be encouraged by the success stories of the beneficiaries and the impact created.

“What the President wanted was to pay every private sector employee (in the education sector). But the cost was humongous so we had to rationalize,” Prof. Osinbajo noted regarding the payroll support aspect of the Survival Fund.

He added that the feedback from the beneficiaries of both the transport and Payroll Support schemes will encourage the President. “It is good that most people have received the fund, by the time I report back to the President, it will encourage him. “

Responding to beneficiaries in the Transport sector, the VP noted that “Mr President has asked regularly about the progress of the MSMEs Survival Fund. He is particularly concerned about what we can do for transport workers. So you can be sure that we’re going to be focused on this issue.

“We want to make sure that the economy survives, what we are doing is not a favour to the transport industry. We think it is important that this industry survives in the interest of our nation and our economy and the interest of the people of this country.”

In his remarks to the payroll support group, the VP said “I also want to thank all of you, the school owners and beneficiaries. One of the very important things for us, when we were drafting the Plan and design, was that we wanted to look at certain critical sectors of the Nigerian economy that required intervention in the wake of the fallout of the COVID-19 pandemic. Of course, we recognized that schools were vital…”

Prof. Osinbajo said, “We designed the ESP to focus on certain critical sectors, and the education sector, particularly private schools, was one of them because, during the lockdown, private schools were in a much difficult place. So, we felt that we should also support private schools through the MSME Survival Fund platform.”

As the Survival Fund enters its 7th month, the Steering Committee led by Minister of State, Industry, Trade and Investment, Amb. Mariam Katagum and representatives of beneficiaries in the Transportation and Education sectors held a virtual meeting with the VP to express their appreciation for the implementation of the scheme.

The President of the Road Transport Employers Association (RTEAN), Alhaji Musa Muhammed, said the implementation of the Survival Fund was unprecedented in the history of the country, noting that beneficiaries remained indebted to the government for the show of concern during the COVID-19 pandemic period.

He however urged authorities to do more for the sector by creating a Transportation Bank to cater to the growing needs of road transport operators in the country.

The Deputy General Secretary of the National Union of Road Transport Workers (NURTW), Mr Tony Asogwa, while appreciating the effort of the Vice President and the coordinating committee for a smooth implementation of the scheme, noted that the scheme was not a tribalistic programme as beneficiaries are spread across persons from the different ethno-religious backgrounds.

In the same vein, Alhaji Yususf Usman of the National Association of Road Transport Owners (NARTO), said over 60% of members of the group had received payments under the scheme and appealed to the Federal Government to also look into the plight of the owners having catered for the workers.

On her part, Mrs Precious Ukpe, representative of Bookyard International School, PortHarcourt, Rivers State, said the intervention from the Federal Government has been very impactful, noting that it enabled many schools to resume normal activities.

Another beneficiary of the Payroll Support, the Proprietor, Adebabs Inland Montessori School, Mr Babatunde Lateef, thanked the Buhari administration for the payroll support for private schools, adding that “I wish this scheme can continue for long for private schools across Nigeria.”

Speaking on the transparency of the scheme the Vice President noted that “the first problem is that we are limited by the resources available to us. But it was very important for us that this process be a transparent process so that it is an auditable process, anybody can check where money is going, who is receiving money and how many people have received money.”

“And this is one of the reasons why we are extremely proud of the work that has been done by the survival fund steering committee under the very able leadership of the Hon. Minister of State for Industry, Trade and Investment. They had ensured that this is a transparent process.

“It was at the urging of the Hon Minister that we brought in one of the very important private sector players – the Chairperson of First Bank Nigeria PLC, Mrs Ibukun Awosika, to co-chair the MSMEs Survival Fund, so that we could bring in private sector discipline and the efficiency of the private sector into this whole thing,” the Vice President added.

The Vice President appreciated the feedback from both the private school owners under Payroll Support and beneficiaries from the Transport sector, noting that their positive response was evidence of the excellent work being done by the Survival Fund scheme.

He added that the Project Delivery Office of the MSME Survival Fund will also look at the suggestions and address the issues raised.

“I can assure you that we will look at the suggestions raised and see how we can address them,” he said.

Earlier in her remarks, the Minister of State for Industry, Trade and Investment, Amb. Mariam Katagum said that since the enumeration of the first set of beneficiaries on 17th January, 2021, a total of 155,920 beneficiaries in the transport track have so far been approved for payment while 9,109 pending cases are being processed for payment.

The Minister added that the balance to be enumerated is about 19,689 but noted that only 22% of female beneficiaries in the track were reached because of the peculiar nature of the transportation business.

The Minister noted that the education sector alone had about 850,000 applications during the one week the survival portal was reopened, compared to about half of the number when the portal was first opened for six weeks.

She said that so far, 43% of the Survival Fund beneficiaries are females.

“At least 100,000 employees in the education sector have been paid as at the last count, and more employees in this sector have been whitelisted for approval of payment. Private schools play an important role, government cannot do it alone in terms of educational provision. So going forward, whenever we find the opportunity to assist, we would do as much as we could,” she stated.

Preparations are ongoing to pay the balance of beneficiaries under the various tracks while prospective beneficiaries of the General Grant and Guaranteed Off-take Scheme are being enumerated for payment.