Lekki Shootings: Only Buhari Has The Power To Order Deployment Of Soldiers – Army General tells panel

Lekki Shootings: Only Buhari Has The Power To Order Deployment Of Soldiers – Army General tells panel 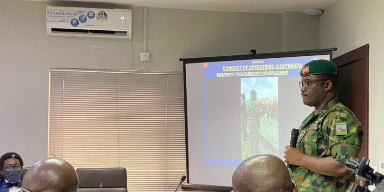 He said this under cross-examination by counsel to the Lagos State Government, Abiodun Owonikoko (SAN), while testifying before the Justice Doris Okuwobi Judicial Panel of Enquiry and Restitution on the alleged atrocities of the disbanded Special Anti Robbery Squad (SARS).

The army general admitted that Governor Babajide Sanwo-Olu does not have the authority to give order to troops. He said he could only have made the request for them to be deployed.

General Taiwo also said it was not true that the Nigerian Army was looking to nab entertainer DJ Switch over the role she played in giving the impression that people were massacred at at the Tollgate plaza.

“Some people take delight in misrepresenting Nigeria and particularly the Nigerian Army to the international community and our fellow Nigerians. This, I believe is done for pecuniary gains.

“Quite recently, a Nigerian, Catherine Udeh, also known as DJ Switch, claimed the Nigerian Army was looking for her. There is nothing further than the truth.

“My Lord, we have bigger fish to fry; and that is how to stabilise Lagos. We can’t be bothered chasing one or two people. Where she got that from, I do not know, ” he said.