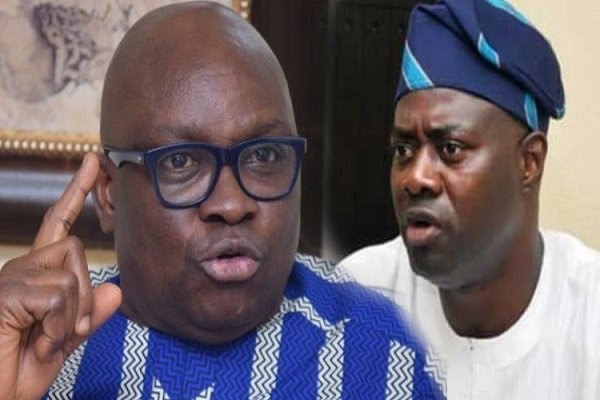 Former Ekiti Governor Ayodele Fayose has described Oyo Governor Seyi Makinde as a failed Governor, who does not deserve re-election.

He said the Governor had decided to betray party elders, who assisted him during the electioneering by turning his back against them.

The former governor ruled out any reconciliation with Makinde, saying that the Governor is an obstacle to dialogue.

Fayose told reporters in Lagos that Makinde had the effrontery to query the decision of the National Working Committee (NWC) on critical party matters, thereby making a mess of party leadership.

He alleged that the Oyo Governor was behaving as a politician itching to run the NWC along with his state, adding he had evolved some strategies for division and polarisation of the party in the Southwest.

The former governor was reacting to comments by Makinde, who vowed to ensure that reactionary elements within the Southwest PDP would be fought and defeated.

Makinde also was reported to have warned the NWC against postponing the zonal congress of the party billed for March 6.

He said the zonal chapter will explore legitimate avenues to get the chieftains to do what is right for the party.

However, Fayose said the Makinde had deluded himself into thinking that he is the zonal leader because he is Governor.

He said: “Makinde is a failed governor. He has proved it by his inability to protect the people of Oyo State. He has demonstrated more than enough reasons not to be fielded as our PDP candidate again. He has betrayed trust and in our group, we will not sit with him in dialogue.”

Lamenting that the Governor is opening many battle fronts, Fayose added: “Majority of people Makinde is fighting today are the people who made him. He should stop his ranting. During the congress, we will teach him lessons; that becoming a Governor does not make him a leader. Let him continue to parade the failed politicians around him.

“He wants to run the NWC alongside Oyo State to assist his inordinate ambition to control the Southwest. He lacks the moral justification to criticise the NWC. He who comes to equity must come with clean hands.

“Makinde must be rejected by the people of Oyo State. The young man is opening all fronts for war, barely one and half years in office.”