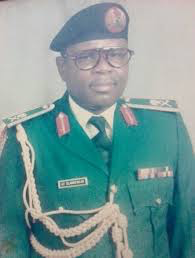 I read, with delirious amusement, the attempt by Tajudeen Olarenwaju via a press statement today (September 7) to rewrite the history of the land on which the popular Oriental Hotels, Lekki presently stands.

Ordinarily, one would not have bothered joining issue with a failed soldier who obviously is still suffering from the trauma of being publicly shamed over involvement in the failed 1997 coup (Diya coup). But one thought otherwise, realising that a sizeable segment of our demographics (millennials and Generation Z) today were either unborn or too young to understand when these events unfolded and, so, might be misled by Olarenwaju’s fairy tale.

Of course, Olarenwaju’s latest misadventure in crude revisionism is against the backdrop of a recent 30-minute TV documentary on Asiwaju’s political evolution (entitled ‘Tinubu: The Pathfinder of New Lagos’), with particular reference to his 8-year tenure as Lagos Governor (1999-2007), which is currently enjoying rave reviews and plaudits in enlightened political circles.

As a true Lagosian myself, I watched the said documentary twice and believe it is a fair representation of the facts of history. One, the documentary in question abided by the tenet of intellectual honesty by clearly acknowledging and commending the contributions of governors of Lagos like Mobolaji Johnson, Lateef Jakande and Mohammed Buba Marwa to the development of Lagos State. Only sick minds and shamelessly partisan viewers would seek to deny the path-breaking and landscape-transforming achievements of Tinubu in diverse sectors including the radical opening up and modernization of the Lekki Corridor.

Well, among a raft of spurious claims and politically-motivated attack on Asiwaju, Olarenwaju disputed the assertion that the land on which Oriental Hotels stands wasn’t full of garbage, even as he lays claims to the ownership of the said land by proxy. Nothing could be further from the truth!

To begin with, any discerning observer would easily notice that Olarenwaju craftily attributed ownership to Kembu Company and only tried to insert his affiliation to the said Kembu in the next breath. Such semantic manoeuvre was undoubtedly borne out of Olarenwaju’s own self-awareness that stating directly that he acquired such a prime real estate as a serving soldier cannot stand a moral scrutiny. For, it will only remind Nigerians of how soldiers of fortune like him looted the country shamelessly in the 80s and the 90s and attempted to convert every conceivable public space or asset to personal estate.

Contrary to Olarenwaju’s claims, inhabitants of that area up till early 2000s would indeed attest that the entire coastal line (stretching from Ozumba Mbadiwe through the Civic Centre/Boat Club, through the front of the present Mobil Office, to the Oriental Hotel, further down the Lekki- Epe corridor) was all refuse dump-site. In fact, there was even a very dirty fish market exactly opposite Mobil office at the time.

The facts of the matter:
1.) It was the late Mike Akhigbe as military governor of Lagos that originally allocated the land on which Oriental Hotel stands to the Chinese-owned Wempco Group in 1987 — 12 long years before Tinubu dreamt of becoming governor.

2.) However, Wempco could not develop because of the obvious unviability of that shoreline until Tinubu came and gave a 2-year ultimatum to all allottees of the shoreline to develop or forfeit. The order by the Tinubu administration was after Lagos won the planning regulation case against the Federal Government at the Supreme Court.

3.) That was when the Chinese owners of Oriental Hotel started to build and others too began to develop.

Contrary to widespread beer-parlour rumour and silly insinuations in some quarters, Asiwaju doesn’t own one kobo share in Oriental Hotel. The Hongkong Chinese Tung family that owns the hotel has been operating in Nigeria since the late 1950s and also operated the Golden Crown Chinese restaurant along Ikorodu road since the 1970s till they moved to the present hotel and they also own the Omo Wood in Ijebu Ode and are known to be close family friends of the present Awujale of Ijebu Ode.

Since the Supreme Court already gave a judgement in favour of Lagos State over this particular shoreline, one would have thought that soldiers of fortune like Olarenwaju in possession of self-allocated Certificates of Occupancy (C of O) over our common patrimony, would show contrition by keeping quiet instead of making bogus claims that would only remind Nigerians of their infamy and looting under the guise of military rule.

By putting up this puerile argument over Oriental’s land, Olarenwaju only seems to have inadvertently given more ammunition to those who perceive him as hopelessly incompetent, having failed as Communication minister under the Abacha junta and capped that career of incompetence with his unsoldierly conduct by trembling like rain-beaten native fowl and sulking like an infant while appearing before the Victor Malu panel that tried him and others involved in the 1997 coup plot (as transmitted by NTA in 1998). So disoriented was this cowardly General, when faced with the risk of maximum penalty, that he started singing like a canary under cross-examination, confessing that he had built houses for all his children while in service! The big question was: could his honest salary as a soldier be enough to have built the collection of wondrous mansions uncovered by investigators?

Enough of the rantings of a failed coupist!