Over two thousand hectares of land with titled documents have been given by 24 States for the Buhari administration’s Social Housing programme, while 17 States have indicated interest to participate in the Solar Power programme, both important elements of the ongoing Economic Sustainability Plan. 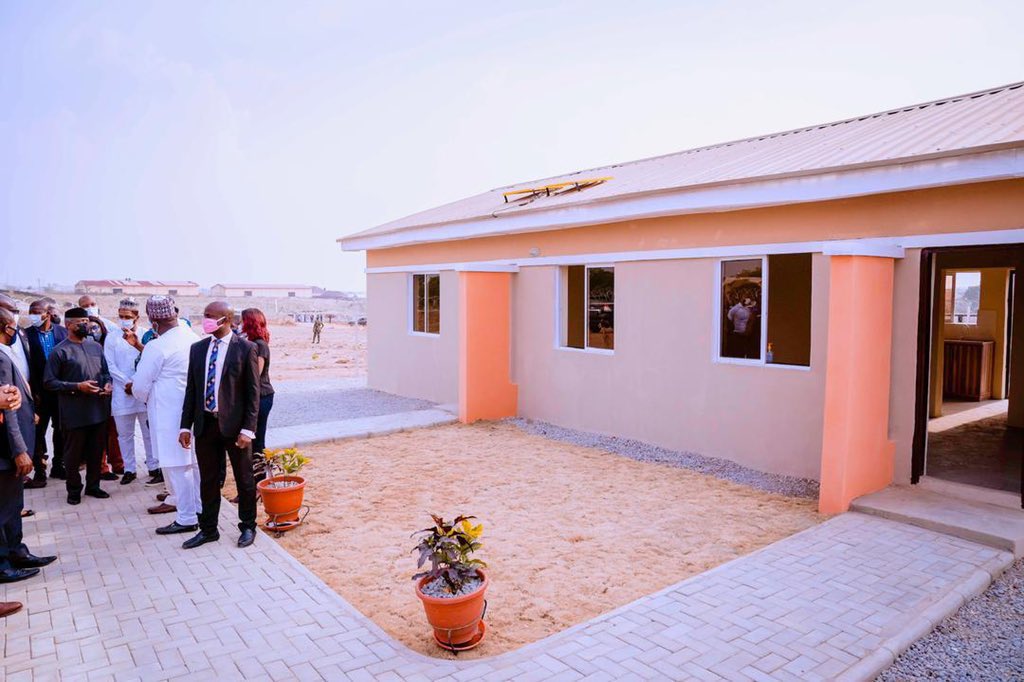 These were some of the highlights emerging from a review meeting on the Economic Sustainability Plan implementation presided over by Vice President Yemi Osinbajo, SAN, at the Presidential Villa over the weekend.

Commenting on the implementation of components of the Economic Sustainability Plan (ESP), Prof Osinbajo said the Buhari administration will continue to focus on creating more jobs while improving access to power and affordable housing for majority of Nigerians.

Highlighting the progress so far, the Vice President assured that the Federal Government will ramp up efforts to so more Nigerians have access to electricity and affordable housing.

According to the presentation made by the Managing Director of the Rural Electrification Agency (REA), Alhaji Ahmad Salihijo, the Solar Power Naija team has had engagements with the 6 states who have identified private sector developers. The team has also selected Akwa Ibom, Ekiti and Kano as pilot states for the state-guaranteed transaction model for the solar power programme.

He explained that REA is currently tracking transactions worth N55 billion potentially contributing the first two million connections in Nigeria and providing thousands of jobs.

For instance, the programme is currently tracking four transactions in the commercial bank upstream channel contributing 3,500 jobs and 100,000 connections.

The MD added that 9 participants have submitted applications for over N4 billion of the N20 billion allocated with three companies close to receiving disbursements.

On the other hand but in the same vein, the Managing Director/CEO of the Family Homes Fund Limited (FHFL) – the implementing agency for the Social Housing scheme, Mr. Femi Adewole, stated that 17,584 units across 16 locations are now on the pipeline.

“We are having a successful push in assembling land to feed the housing construction. So far about 2156.4ha have been assembled ready for development. This has the capacity to accommodate about 65,000 homes,” he said.

Adewole further said that under the ESP Social Housing programme, Nigerians would be given at least a 15-year period with a monthly payment at six percent interest rate to pay for each housing unit.

While the rates are significantly low, the MD noted that this period can also be extended through refinancing.

“This will help to improve access to housing for low-income people in the informal sector who-(otherwise) will not have an opportunity to access a mortgage,” he stated.

He further said that in addition to the typical 2, 3, and 4-bedroom housing units, the FHFL was considering a “Students and Young People’s Housing – to address the needs of young people.”

An agreement with the Central Bank of Nigeria (CBN), has now been finalized and signed by Family Homes Funds, he disclosed while drawdown is subject to a guarantee from the Ministry of Finance.

It would be recalled that the CBN had committed to a N200B facility with a guarantee by the FG via the Finance Ministry for the Social Housing scheme.

Speaking further, the FHFL MD noted the agency has struck partnerships with Dangote Cement for the provision of cement at subsidized rates to construct the ESP homes, adding that “we expect to reach a similar agreement with the other two majors shortly.”

He added that the FHFL has signed an MoU with the ESP Solar Power project including 3 suppliers to provide low-cost solar panels to the homes.

Adewole stated that the delivery of the units would be through SME Delivery Partners – who are being encouraged to register on the Housing Portal.

He said, “So far about 7,333 SME groups and individuals are registered on the online portal. Up to 2,000 of these will be involved in current projects.

“We will be drawing from ongoing experience on our project in Yola where the construction of 3,600 homes are ongoing and a partnership between FHFL and the Ministry of Housing is implementing a large-scale youth employment scheme currently employing 1350 young people. The young people are manufacturing interlocking tiles, paving, screeding, etc.

For the ESP Social Housing Adewole said “about 228 Manufacturers of Building Components have expressed interest in supplying inputs including doors, glazing, paint, roofing sheet, etc. We are now engaging with these to secure bulk supply of key materials which in turn will provide opportunity to grow their production capacity.”

Already sites for early start projects have been identified in all the 6 geo-political zones in addition to the FCT. The sites include those in Ekiti and Ogun in the Southwest, Enugu, and Abia in the Southeast, Delta, and Edo in the South-south, Yobe, and Bauchi in the Northeast, Kaduna, and Katsina in the Northwest and Nasarawa and Plateau in the North-central. Sites have also been identified in Abuja including at Dei Dei where the VP earlier visited to see the sample designs of the Social Housing homes.

Speaking specifically on the mass housing scheme, Prof. Osinbajo emphasized that the focus must be on providing affordable housing for the masses.

According to him, “if the Federal Government is going to intervene in housing, most of it should be social housing. Everybody else, including the private sector, can build N9.6 million worth houses, but nobody else will do social housing.

“All over the world, when government intervenes, it is social housing…those who cannot afford housing are the ones we must focus attention on.

“I think that we have enough problems with finding homes for the vast majority of Nigerians who cannot find a home. The people who are poorest who have no houses are the people we should target because that is what government should do. Let’s focus on this social housing.”

The Vice President added that the Federal Government will continue to collaborate with States to ensure more Nigerians benefit from the Social Housing scheme.

Under the Social Housing Programme, the Federal Government plans to support 1.5 million Nigerians to acquire low-cost houses through mortgage options and also Rent to Own option. The scheme is expected to also generate 1.8 million jobs and deliver houses to about 1.5 million Nigerian families. The houses are to be priced around and about N2m and N4m each putting it within the reach of the low-income earners, depending on the number of rooms. There are one, two and three bedrooms options.