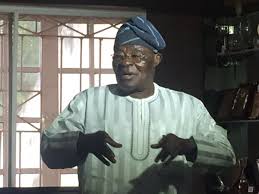 An advocacy youth group within the All Progressives Congress in Oyo State, Pacesetters Progressive Youth Forum (PPYF) has described the Party’s State Caretaker Chairman, Chief Akin Oke, as an unsung hero of democracy and quality leadership whose record of service to the nation and the progressive political fold would be cherished forever.

Addressing journalists after a courtesy call on the Oyo APC Secretariat at Oke-Ado, Ibadan on Tuesday, the PPYF State Coordinator, Comrade Dauda Saliu Ajana, stated that the emerging political class of youth had a lot to learn from the likes of Chief Oke who, he noted, remained a core progressive of Obafemi Awolowo’s school of thoughts despite facing numerous challenges in the field of politics after the death of the Sage.

“It is time we began to appreciate the immense contributions of our outstanding leaders while they are still with us. Some of us did not meet the Great Awo on the political turf but we have few of his disciples around who would never compromise his ideas of progressive party politics, accountable and purposeful governance as well as leaving behind an enduring legacy after holding a public office.

“It may interest the whole world to know that the current leadership of the APC in Oyo State under the chairmanship of Chief Akin Oke has done something new to underscore the status of our dear state as the Pacesetter. We, in Oyo APC, are still struggling to cope with the reality of the fact that an edifice is now being completed at a highbrow location in Ibadan to be called their permanent state Secretariat of our great Party.

“It is unprecedented in the history of party politics in the country that a befitting structure would be built from the scratch to serve as party offices and meeting place for all party faithful without any individual or group being the donor(s). Oyo APC has blazed the trail again as a multimillion naira building project being constructed by the current leadership would be commissioned for use in few days.

“Interestingly, the same person that galvanized support for the progressive to rule the state for a record uninterrupted two terms from 2011 to 2019 is largely responsible for this enviable feat. And despite losing the gubernatorial election to the opposition in the last general, as a result of many internal factors, after securing electoral victory for two out of three as well as nine out of fourteen House of Representatives candidates respectively.

“It is on this note that we are calling on all stakeholders from within and outside the state to rally round him (Oke) and ensure that Oyo APC is fully returned to the winning ways in no time. All estranged members should return without any conditions and support Baba Oke in his resolve mentor the right people to be able to deliver on effective party administration and good governance.” Ajana added.