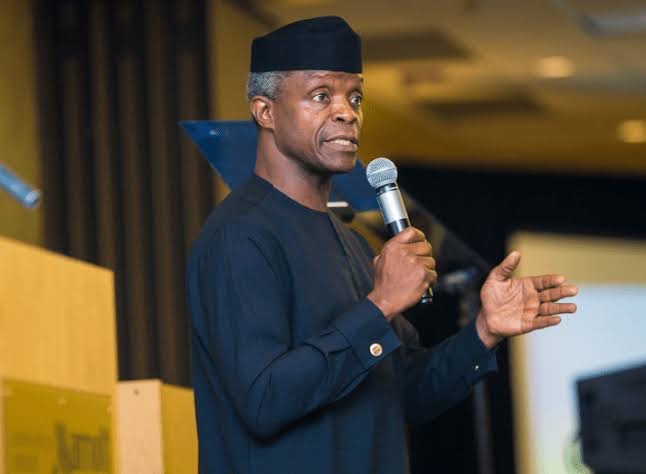 Vice President Yemi Osinbajo says the role of the private sector in building a strong sanitation economy will drive the sustenance of the results being achieved under the Clean Nigeria Campaign.
Osinbajo spoke at a ceremony organised to mark the first anniversary of Clean Nigeria: Use the Toilet Campaign with a view to ending open defecation.

The vice president said that the initiative of the Organised Private Sector in Water Sanitation and Hygiene (OPS-WASH) tagged ‘Flush it’ aimed at promoting private sector-led innovative financial strategies in WASH was a welcome development.

He said that, to effectively moblise the entire country towards ending open defecation, campaign ambassadors had been identified to support the national drive towards open defecation free status.
“The success of the Clean Nigeria Campaign will contribute to some of the key priority areas of the government which include enhancing social inclusion and poverty reduction, expanding business growth and entrepreneurship and expanding access quality education, affordable education, quality healthcare and productivity of Nigerians.

Osinbajo said that the event provided a platform for stakeholders to reflect on the progress being made to reiterate government’s commitment to improving the living standards and quality of life of the people.
According to him, access to adequate water, sanitation and hygiene services is a critical factor in socio-economic development of any nation as it contributes to human capital development outcomes such as early childhood survival, health and educational attainment.

He said that access to the above listed services was also one of the key preventive measures of the raging global covid-19 pandemic.

The vice president said that more local government areas in the country had made progress in combating open defecation.