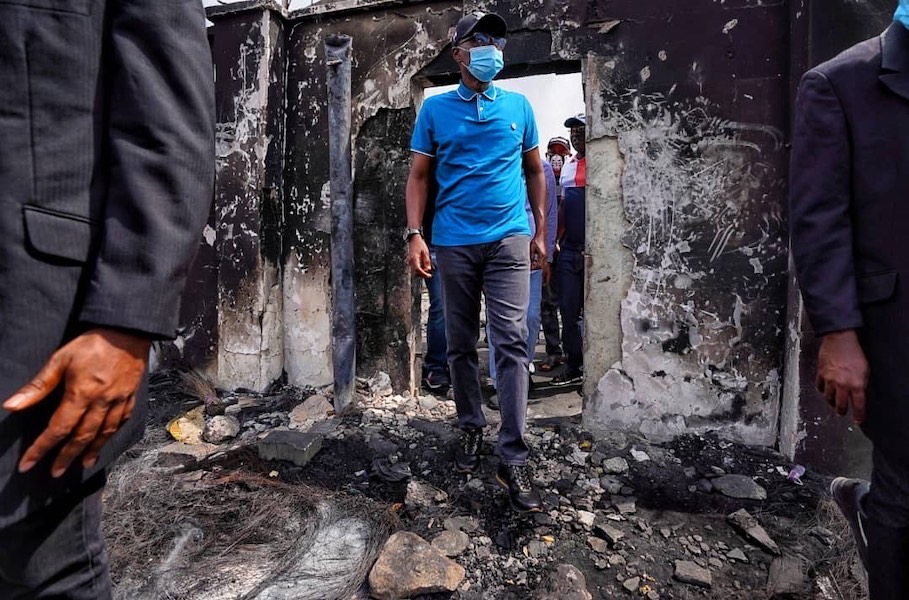 Following the carnage that was the aftermath of the EndSARS protests in Lagos, Segun James looks at the efforts of the state government to put the state back on the path of growth again

For Lagos, the highjack of the #EndSARS protest was a long nightmare. It started as a protest by youths against the atrocities of a police department, the Special Anti Robbery Squad (SARS), which had been terrorising them for years.

IAngered by government’s indifference to the activities of the police, the youth took their protest to the Alausa Government House to demand that Governor Babajide Sanwo-Olu should call the police to order.

For three days the protest became a carnival as the young men and women played music and dance. The governor, who was impressed by their conduct, promised that their grievance would be looked into immediately.

Then, some hoodlums infiltrated the movement and started attacking vehicles and people. Alarmed at the turn of event, Governor Sanwo-Olu appealed to the youth at Alausa to disband and go home. They agreed as they peacefully dispersed.

But that was not to be at the other protest venue at the Lekki Toll Plaza in Victoria Island. The youth refused to leave, and when a curfew was instituted, men of the Nigerian Army were dispatched to the scene.

Who could have set the nation’s oldest courthouse on fire? What was the motivation behind this action that has set the state back? Now, the state is set to rebuild. It was with this in mind that Governor Babajide Sanwo-Olu has set up the Healing Lagos Initiative.

The people were horrified, the nation was stupefied by the atrocity. Few states, except during the Nigerian Civil War have suffered such a nightmare so devastating as the aftermath of the protest, and worse still, fewer have been prepared for such calamity that followed.

Security threats world over are no longer about territorial dispute and military confrontations, they are fast including nontraditional political threats like protests arising from political, economic and social issues. In Lagos it was a protest against police brutality.

Contrasting worlds collided in Lagos. It is the economic powerhouse of the federation. Lagos epitomises everything Nigeria. But Lagos scarcely disappoints with its capacity to produce uplifting situations. Governor Sanwo-Olu has lived up to this with his Healing Lagos Initiative.

Since 1999, Lagos has always proved pundits wrong with its capacity to rise from the ashes to the zenith. This can be attested by the fact the that state’s economy is the fifth highest in the Africa. It has been blessed by a set of reformist and progressive governors who pride themselves on the pragmatic development of the city-state.

Sanwo-Olu since coming to government has taken the challenges that face the state with gusto. Since 2019, he has done the same as his predecessors by pulling off one of the most impressive government among states in the country. In fact the state has become the model for others in the federation.

Lagos has made extraordinary strides in recent times. The growth in per capital incomes is the greatest in the country. And last year, it was the largest contributor to the nation’s GDP and VAT income.

Shout “Population growth”, many people immediately think Lagos and resources under stress. That is why the arson attack on major infrastructures in the state was alarming. Why burn down facilities that are already bursting on the seams and not enough for the population expansion?

Lagos is one state where at least 100 people arrive every hour without any intention of leaving. The pressure on the infrastructure is high and the government is trying hard to meet the demand, especially in the area of transportation, waste management and road network.

The first thing that the government is doing is taking the rebuilding effort one at a time. Governor Sanwo-Olu has set up a board to oversee the new transformation. Headed by a renown banker and chairman of Citibank Nigeria, Mr. Yemi Cardoso, the eight-man Board of the Lagos Rebuild Trust Fund, will plan, execute and ensure the speedy completion of the destroyed facilities.

Sanwo-Olu, at the inauguration of the board, said government decided to put the criminal destruction behind it and face the huge and necessary task of rebuilding the state. The government, he said, would be embracing new standards of governance and building stronger partnerships, which would enable the state to bequeath stronger institutions and cohesion among residents.

He said many friends and admirers of the state have been calling to lend a hand in rebuilding the razed assets. “In the last few weeks, we have been inundated with local and global offers of assistance to rebuild our state and recover all we lost to arson and violence in October. It is obvious that we can no longer wait to begin the onerous task of reconstructing Lagos. In the next few days, our government will be sending a bill to the House of Assembly for the establishment of a Trust Fund to Rebuild Lagos.

Today, I am signing an Executive Order to set up an eight-man Lagos Rebuild Trust Fund Committee, which will begin to oversee our recovery process. To ensure the highest standards of probity, transparency and accountability, FBN Trustees headed by Mr. Kunle Awojobi will oversee the Lagos Rebuild Trust Fund Committee. The committee m will comprise five members from the private sector, two members from the public sector and one member from the International Donor Aid Community.

“We will embrace new standards of governance and build stronger partnerships, stronger people, stronger institutions, and stronger Lagos. Our strength lies in our uncanny ability to overcome the most complicated challenges because we have people who genuinely love Lagos State and will assiduously do all they can to preserve its peace and unity.”

Sanwo-Olu said the Trust Fund would be responsible for getting detailed cost of restructuring and rebuilding of destroyed assets. The funds, he added, will also advise the state government on the most critical assets to prioritise and identify emergency response service critically needed.

The rebuilding plan, the governor said, will be all-inclusive, stressing that the government would welcome support and contributions from well-meaning individuals and corporate organisations who believe in the Lagos Dream.

His words: “I believe this is the starting point of a new socio-economic process. I am hopeful that this initiative will help us to seamlessly make the transition to a rebuilt Lagos with upgraded public structures, facilities and amenities. I know that the ashes that presently dot our landscape will birth modern and globally acceptable infrastructure.

At the centre of this decisive action to rebuild Lagos is the need to closely work with the people and organisations who call Lagos home; those who believe in the Lagos Dream, and those who share our collective vision of a mega-city that thrives on peace and unity among all ethnic groups. Those who know that the future of Lagos is tied to our ability to keep nurturing our state and those who are ready to commit their resources to the glory of our state, because their future is the future of Lagos.”

The Commissioner for Economic Planning and Budget, Mr. Sam Egube, and Permanent Secretary, Ministry of Works and Infrastructure, Engr. Jimi Hotonou, are members of the Board representing the public sector.

With the move, Sanwo-Olu expressed optimism that the state would attain new heights of development for a more resilient system and become more united in achieving its development goals.

As part of the Rebuilding Lagos move, Sanwo-Olu, assured Lagosians that the state government would complete the ongoing construction of the Lagos-Badagry Expressway.

He said his government is committed to the construction of the Lagos-Badagry Expressway, saying that the delay of work on the road was based on the government’s plan to build a first-class infrastructure that people would be proud of when completed.

“I want to assure you that the Lagos-Badagry Expressway would be completed. The road was just a two-lane way, but the government has turned it into 10 lanes, five on both sides. We are doing a complete rebuild of the road, with bridges and interchanges. We are building a road that will last for 30 to 40years for you. And because we know that this is an international gateway, it does not deserve anything less. We are building a first-class road infrastructure that all of you would be proud of.”

As the starts the rebuilding efforts, Sanwo-Olu has vowed that never again will such atrocities be allowed in the state that prides itself as the Centre of Excellence.
Previous Posts SPEAKER FEMI GBAJABIAMILA COMMENCES THE REHABILITATION OF ADDITIONAL 15 ROADS IN HIS SURULERE 1 FEDERAL CONSTITUENCY.
Next Posts Femi Gbajabiamila, Lawan crave more women participation in governance