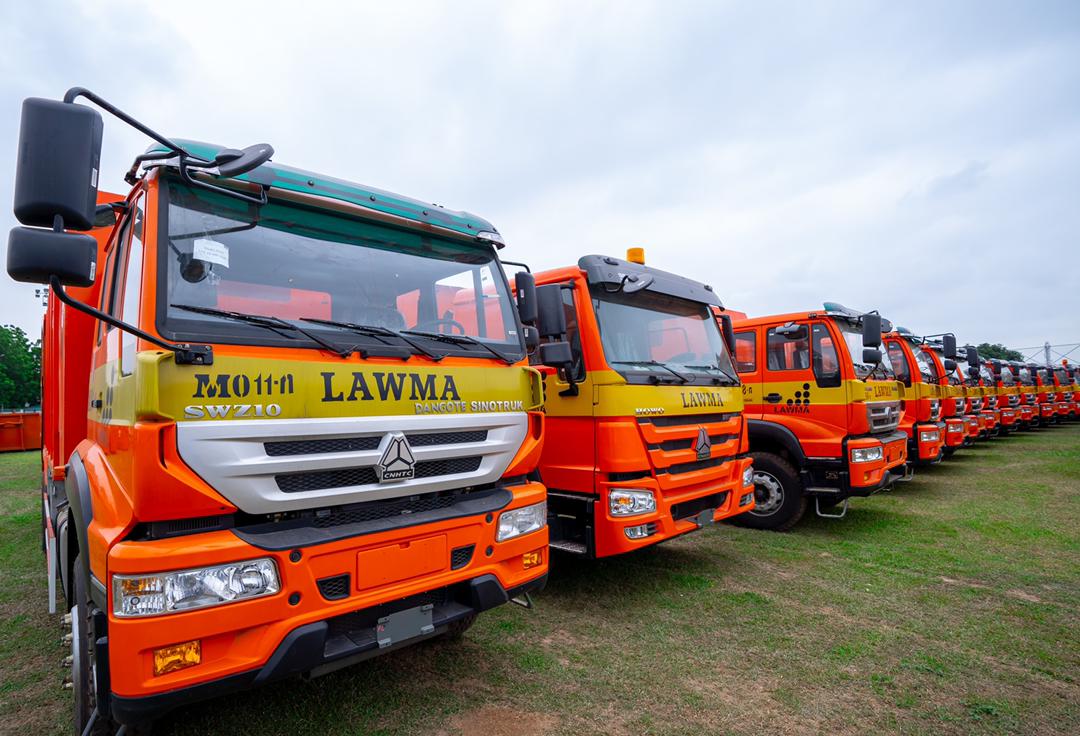 A major step towards a cleaner Lagos will be taken on Wednesday, 4th August, 2021, when Governor Babajide Sanwo-Olu will unveil a set of 102 new locally assembled trucks for the Lagos State Waste Management Authority (LAWMA). There are also 100 double dino bins painted in the all-orange LAWMA colour.

The Managing Director/Chief Executive Officer of the Authority, Mr. Ibrahim Odumboni, has described the local assemblage of the trucks as first of its kind.

Odumboni said: “The volume of wastes generated in the State is so huge that we need mobile waste management trucks in good working condition to effectively manage it. This is why Governor Babajide Sanwo-Olu has given us much of the things we require to function. The new trucks will be distributed to cover major areas in Lagos and, as such, there is no excuse not to deliver.

“Waste management is a big sector in Lagos, one of the world’s fastest-growing megacities and Africa’s most populous. Residents generate an estimated 13,000 metric tonnes of waste daily. In the sector, 6,000 people have been employed. There are many Private Sector Participators (PSPs) who spoke also of 550 trucks in their fleet.”

The Government has embarked on the rehabilitation of all dumpsites in the State, according to Odumboni, who said efforts are ongoing to convert wastes to energy.

His words: “We will get to that point in this administration when electricity will be generated from wastes. We have a mandate from the Commissioner for the Environment and Water Resources to deliver and we understand the peculiarity of Lagos, so we want to ensure that things are done properly.”
.
The LAWMA boss advised residents to continue to patronise the PSP operators and pay them promptly. Besides, residents, he said, should stop desecrating the environment with wastes and throwing refuse in the drains.

On the interest of investors in the sector, Odumboni said: “For the PSP, we have about 457 operators and majority of them have at least three trucks. LAWMA is still working to bring more investors into the waste management cycle.”

He described the Olusosun dumpsite, the biggest in the State, as an old facility that has been in existence for 27 years, adding that there are plans to migrate the site to a state of energy.

“We are intensifying efforts to turn wastes to energy; wastes can be extracted and turned to energy,” Odumboni affirmed.

He said that LAWMA is working on a consistently cleaner Lagos and LAWMA has created an app where residents can monitor all environmental infractions.