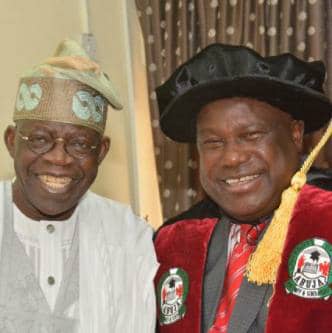 The lawmaker who eulogised the Jagaban of Borgu Kingdom, the former senator and ex governor of Lagos State also described him as a democrat, human capacity builder who stands for fairness and justice.

” Asiwaju Bola Ahmed Tinubu, The Jagaban of Borgu Kingdom, is a democrat with outstanding political credentials that makes him stand tall amongst his peers.

“Asiwaju, a proactive political strategist, game changer, unarguably true and great leader is worth celebrating on this auspicious occasion of his birthdate celebration.

” Jagaban, the unassuming life builder, is a unique philanthropist, whose impacts goes beyond the shores of Nigeria. I am blessed to be associated with this uncommon and well respected leader.

“Aside using his political vastness to benefit many, it is not a fallacy to equally say that Asiwaju Tinubu’s name will always be in gold in the history of Nigeria democracy.

” I pray that The Almighty Allah will grant him his heart desires with long life in very sound health in his selfless service to nation building.