Chief Richard Osuolale Abimbola Akinjide was a very dear father, mentor and role model to us.
He was humble, kind and always had a listening ear. 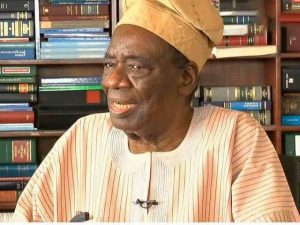 The news of his demise came as a rude shock to Abimbola and I. He played an important role in our union which started when he chaired our wedding ceremony in December 1995, and had remain very supportive since then.

It is truly heart breaking but we are not only consoled that Papa has written his name in the sands of time, we are also happy that he is in a better place.
He was a professional in every sense of the word. A true believer in the rule of law, his intelligence and thoroughness set him apart amidst his peers. He will surely be missed in the Nigerian Legal System.

We thank God for giving Papa Akinjide the opportunity to make clear-cut impacts during his well-spent time on earth. I pray that his legacy will not dwindle and that The Good Lord will grant him eternal rest.

It is also my prayer that The Good Lord will grant the entire Akinjide family, the Judiciary where he served admirably and the nation he served meritoriously the fortitude to bear this colossal loss.