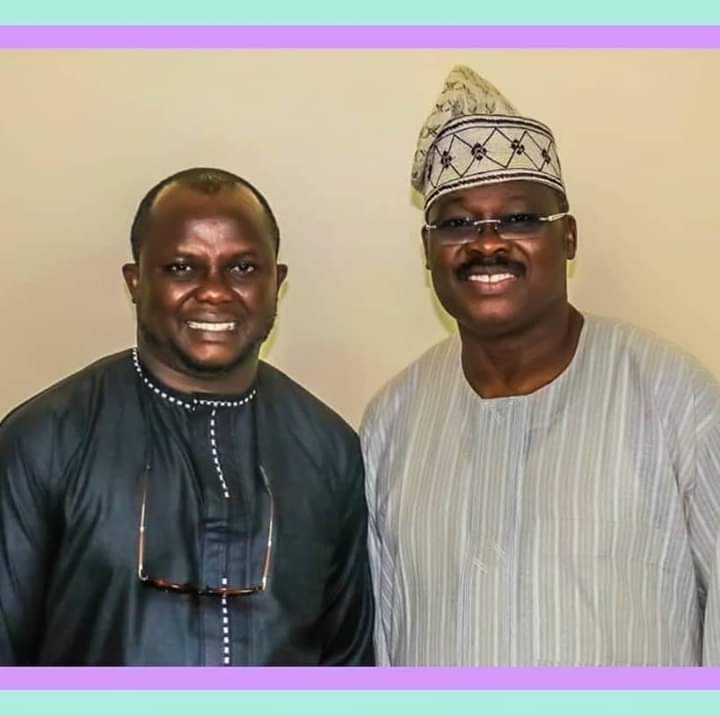 I was a growing kid when late Bola Ige became the governor of Oyo State.

It took me few more years to be aware of him and his administration. I became politically conscious so early. As a JSS3 student, I had followed human right activists in staging the unrest that followed the annulment of June 12 presidential election.

That was the day that I  trekked from Apata, Ìbàdàn to Ring Road, then all alone to Eleyele, only to get home and breakdown. From that moment, I had started buying the weekly publications of Tell Magazine, believing that MKO Abiola would still become the president of Nigeria.

When in 1999 Nigeria was to start a new Republic, I had vehemently argued among peers for the election of Great Lam. As the emergence of Lam Adesina had given me joy, the loss of Olu Falae given me the feeling of a student who failed their examination.

Through the 2003-2007 NASS, I had taken note of the brilliance of a senator from Oyo State, and it had given me joy that Isiak Abiola Ajimobi was from my state.

When in 2006/2007 aspirants were jostling for the tickets of political parties, I was elated that my favourite senator was among.

Despite that I had always held Asiwaju Bola Tinubu, and that I had always supported his political platforms, I never hesitated to support ANPP, when that was the only means of Ajimobi to contest in the general elections.

When voting registration was to be done in 2006, I had tight schedules in Ijebu-Ode. Sadly, I couldn’t register in Oyo State — I was forced to get registered in Ijebu-Ode. When it was time for elections, the break took me to Oyo Town. My ineligibility to cast votes in Oyo State did not totally render my love and support for Ajimobi invalid. I had before the election approached numerous friends and loved ones to convince them about voting for Ajimobi. As disciplined as my erstwhile HOD at the college, four years earlier, Pastor Nath Adegbite has been, my discussion with him made him to form an opinion. I remember going to his house as early as possible so we could together go to his polling unit. I also remember that when on our way, I showed him the poster of Ajimobi, he jokingly said, “Truly, the man is handsome, I will vote for him.”

Just as I would do anything to support Asiwaju Tinubu, Ajimobi became my only stake in Oyo State politics — the reason I have always loved whoever loved him and detested who was against him

With pride, I had shown my love for the man without bothering to meet him at any point. While I had been at different fora where he addressed multitudes, I had the first opportunity of having a one-on-one interaction with him sometimes in 2016 when he was to meet a group of guys in which I was.

In the course of introduction, I observed that the affection was mutual — he had spent much more time in getting to familiarise with me. He asked, “Which of the Adebiyis are you?” Of course my father has never been anywhere around politics, and of course, he is not of his social class. So, I simply told him, ‘an Adebiyi from Akinyele.’ Then, he decided to bail me out by saying, “You know, I always like to find out if young people are friends of my children or something like that….”

That night, I saw an energetic workaholic — such an epitome of strength.

It was during Ramadan, and our arrival at the government’s house was around iftar, when several people were hosted. He kept attending to various groups, and the turn of my group was around 2:30 a.m. The meeting lasted for about an hour, and that was not his last.

I equally saw in him a passionate man.

I had left for the mosque, and returning, others were already entertained with refreshment. When I was served, there was nowhere for me to sit within the circle of my colleagues. He asked me to come and sit directly beside him, where he was having discussion with another set of people. That moment, I blamed myself for having been so late. I had imagined that how would I be sitting so close to ‘the Constituted Authority’, eating for that matter.

He must have observed this in me as he paused in his conversation suddenly and whispered to me, “Young man, please feel comfortable.”

I was so impressed and I afterwards summoned the courage to enjoy my meal.

During the next Ramadan, someone so close to him had invited me to the government house, and I decided to go around iftar. As usual, Governor Ajimobi was the host of so many people who were of different classes.

The person who invited me then held my hand and we together walked to the table where H.E was seated with some dignitaries. Permission was sought and he was attentive. Then, there was the question,

“Do you know whom this person is?”

Then, the introduction, “This is Kola Adebiyi.”

He jumped to his feet and hugged me. Then he said, “Moti ñwá e!’ I so much appreciate your usual support….”

I had never seen a man that is so unvindictive. After the expiration of his administration, a group of like-minded people requested to pay him a visit which he did grant.

During the interaction, we raised our concerns about the morbid vindictive tendencies of his successor against his person. We complained about the obvious wicked lies but I was amazed when Ajimobi told us that he wanted only God to judge. He had said, “It was at the inception of it all that I felt concerned that a man could be such such callous, but now, I just laugh over it when I see reports of such lies. Now, whenever my wife checks the internet and says, ‘Biola, imagine what these people have been reported to have said again’ I usually tell her I don’t care what is said anymore, if they know they are serious about what they are saying, what stops them from approaching the EFCC?

“In fact, I don’t want you to abuse him so that people won’t say he is being distracted. The only favour you can do me is to seek the facts and juxtapose with whatever lies that they are doling out. You see, I will clock 70 by December. I want to be seen as an elder stateman, and as one, I should not be seen exchanging words with whoever. I leave everything to God. Then, the people should discover which is the fact.”

I can remember some of us saying, after we had left, “Oga has only said his own. How do we leave Inarobo alone with such wicked lies?”

People saw a politician but I saw a prophet-like extraordinary being.

During. A rally at Mapo in 2015, the cloud had been so drenched, then it was his turn to speak to the crowd. He picked up the microphone and prayed to God that the rain should suspend it’s activities until when everyone must have left the rally. To people, it was his usual way of creating humour but surprisingly, as soon as he said the prayer, the cloud started to become clear. There was a thunderous shout of ‘Sheuuuuu,’

Of course, people saw a video where he said he willed never to vie for any post anymore after being a governor. He had shed light on this during one of our meetings. He explained that he had said that based on his volition but that it was at the same event that Late Arisekola and a highly respected Islamic cleric admonished him with Quran verses against taking such position.

As I type, I have a heavy heart because some of your words sometimes last year keep ringing on my mind. You had said while appreciating our support for your administration “…. I may not have the money to give you but I promise to provide you mentoring. Feel free to open my doors anytime at your convenience.

Simultaneously, I feel so glad that you’ve remained the pride of every sane person who had come across you or heard your name and great deeds.

Even in transition, you remain my hero.