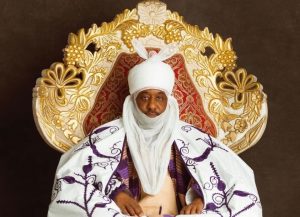 History is a bitch! A terrible one. The Grandfather was deposed by the powerful Sardauna of Sokoto. The Grandson, after years of preparation, finally got to claim back the throne and chose the regnal name of his Grandfather as a nod to the re-writing of history. Sadly, he has now suffered the same fate that befell his grandfather.

The deposition is sad. But not surprising. Since 2015 when Ganduje became Governor, the relationship between the two men has been frosty. Partly down to the fact that Sanusi was enthroned by the previous Governor (Kwankwaso) who had become the political enemy of the incumbent Governor. Sanusi thus became collateral damage, with the Governor looking for ways to cut him to size.

To make matters worse, Sanusi became way too vocal for the traditionally reticent institution that he superintends. His predecessor, Ado Bayero, spent over 40 years in the throne with nary a word in public. Bayero had a brush-in with Governor Abubakar Rimi in the Second Republic but otherwise never came close to being deposed. Infact, his worst run was under the Buhari military regime of 1984/85 when he and his bosom friend, the Late Ooni Sijuade, were suspended, had their passports confiscated and restricted to their palaces for 6 months.

Sanusi, in the other hand, saw the throne as a platform to change centuries of tradition that did not sit well with the ethos of modern day life. He freely gave speeches at every opportunity, spoke against the Almajiri system, promoted girl child education and railed against early marriage. He was an Emir on a crusade and he was determined to use the throne to further his ideals of reshaping the society.

On so many of these issues, his opinion was right on the money. Yet, amongst the intelligentsia of Kano, he had little public and private support. Over several months, I spoke to my friends from the city about him. And the view of him was negative. To them, he was using the throne wrongly and though they agreed with his messages, they all felt that it was from the wrong medium. Emeka Oparah wrote about his lack of emotional intelligence and that really is the prevailing view of his Kano subjects.

It’s sad that it has come to this. Sad for Kano. Sad for those pushing the North to change some of the traditional practices that continues to hold it (and the country) back. Sad for the nation that one of its most colourful and forthright public officials has now been ignominiously removed from office.

Still, he’s young. So who is to say that there’s no more life in the young lion? Is he likely to spend decades in exile like his Grandfather? Don’t bet on it!