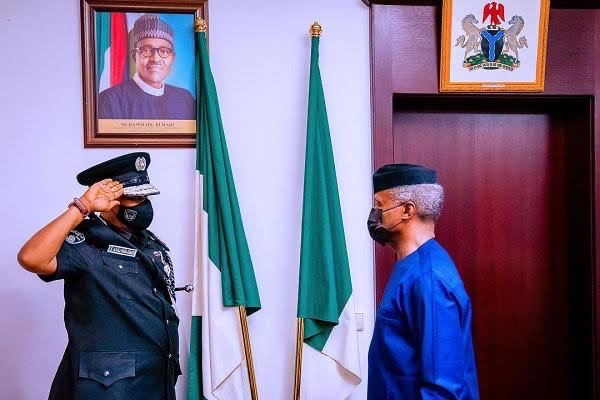 Nigeria is able to overcome the current security challenges confronting the nation and this is why the Federal Government is reorganizing the entire security architecture in the country, according to Vice President Yemi Osinbajo, SAN.

Prof. Osinbajo stated this Monday when he received on a courtesy visit at the Presidential Villa, His Royal Majesty, Yakanaje Uke, (in Nasarawa State), Alhaji Dr. Ahmed Abdullahi Hassan.

According to the Vice President, “there is no question at all that we are facing security challenges, but we are able to overcome them. The role of the leadership is to sit down to think through the problems.

“This is a big country, so policing is very difficult. There is a need for us to reorganize our security architecture, which is what is going on now.”

The Vice President assured that the present challenges will prepare Nigeria for a greater and prosperous future, urging the traditional institution to support the re-engineering process.

His words: “I believe strongly that the reason why we are experiencing what we are going through today is because we are being prepared for the future.

“A future where we will take into account all of the problems because if we haven’t gone through the problems we are going through now, it will be difficult for us to appreciate the importance of fairness and justice, the importance of giving people a voice and a representation. I am very pleased to hear about what you are doing.”

The Vice President explained that “one of the reasons why we have some of the divisions and conflicts in the parts of the country is because people do not feel included in the management of affairs in their localities.”

Commending the Yakanaje for his leadership style, the Vice President said “I think you have created an opportunity where the options are available for bringing appeals to a center of fairness and justice for people from across the country, and its one that is to be emulated.

“And I think that this is the way Nigeria should be. We should be able to say that no matter where you are from, if you have the talent, if you work hard, you will succeed wherever you are. You will not be constrained by your political, ethnic or religious affiliations.”

“Every great society that has succeeded in the world is multiethnic and they succeeded because they brought in talents from all over the place,” the Vice President added.

The Vice President urged traditional rulers to leverage the influence they have over communities to effect positive change for the good of the entire society.

Prof. Osinbajo explained that “it is sometimes very easy to underestimate the importance of the traditional institution. But the sheer size of the places where you superintend speaks volumes about the potential of our traditional rulers.

On his part, the traditional ruler commended the Vice President for his ability to bring people of different ethnic groups in the country together. He said in his kingdom in Karu LGA of Nasarawa, “we are emulating your efforts, bringing ethnic groups in Nigeria together as one.”

Commending the efforts of the Emir in promoting unity and peaceful coexistence, the Vice President noted that “I have heard a lot about the work that is going on and particularly fascinating for me is the fact that you have somehow managed to bring together a representation of Nigeria into the management of the affairs of your kingdom.”

Continuing Prof. Osinbajo said, “this is very commendable and it is something that we must commend and see how it is replicated in other parts of the country.”

The paramount ruler appealed to the Federal Government to integrate the traditional institution in the implementation of some of its intervention schemes for small businesses and the less privileged.

He said traditional rulers are closer to the people and understand the issues and needs in the localities hence the need to be involved in the implementation of the schemes.

Also present at the meeting were the Majority Leader of the House of Representatives, Hon. Alhassan Doguwa; the heir apparent to the throne, Prince Nurudeen Abdullahi, members of the Yakanaje Emirate Council and Kingdom; the Special Adviser to the President on Political Matters, Sen. Babafemi Ojudu, among others.