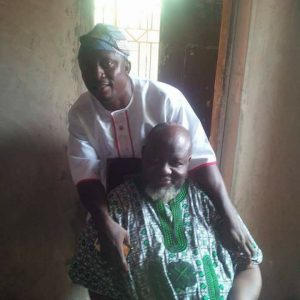 A group of youth within the All Progressives Congress in Oyo State known as The Pacesetter Advance Marines (PAM) has described former minister of Communications, Mr. Adebayo Shittu, as a glorified Almajiri whose parasitic tendencies remained unequalled in the history of politics in the country.

PAM said today in a statement jointly signed by Comrade Dauda Ajana and Kamaldeen Nageri, State Coordinator and Deputy State Coordinator respectively, that the former minister lacked any moral justification to claim membership of the APC in Oyo State in view of the overwhelming evidence of anti party activities hanging on his neck.

“It is a height of hypocrisy and self delusion for a person like Shittu to continue to hold both Sen. Abiola Ajimobi, former governor of the state and Chief Akin Oke, Oyo APC Chairman, responsible for his current travails as a forgotten political player. The 67 year-old under achiever in the legal practice should look inward and discover why he is the architect of his own misfortunes.

“Shittu was a lucky boy in 1979 when he got elected into the State House of Assembly at 26 years but he chose the path of betrayal at a tender age by abandoning his own progressive people and pitched his tent with the Conservative party. This and many acts of dishonesty earned him a curse from Uncle Bola Ige.

He continued his waywardness in 2003 as he joined the PDP administration of Sen. Rashidi Ladoja and he remained an ally of the controversial politician till date.

“He took advantage of prevailing political circumstance at a time and made himself a Buharist in Oyo State while he was handpicked as the CPC gubernatorial candidate in 2011 general election but it turned out that he could not win a single ward out of 351.

Available records indicate that he made a good number of people sacrifice their lives and resources on his ill-fated ambition only to turn them his enemies when he became a minister.

“The merger of three political parties in the country in 2014 gave him an opportunity to be reckoned with as he leveraged on this to secure a ministerial appointment in 2015 following the emergence of Gen. Muhammadu Buhari (rtd) as the President of Nigeria.

The decision of Mr. President to make Shittu a minister in his cabinet did more harm than good to the reputation of our dear Baba Buhari as it did not take him (Shittu) a month to manifest his true colour of covetousness and sadism.

“There is no denying the fact that the new man at the helms of affairs in the Ministry of Communications, Dr. Isa Pantami, is still battling to clear the mess left behind by his predecessor in person of Mr. Adebayo Shittu. The all-important ministry did not experience any value addition under a clueless minister who was nicknamed Mr. Estacode in view of his penchant for useless foreign trip only for the sake of travel allowances and self-aggrandizement.

“The same dubious character, who tricked some of our members away from the Party in an attempt to float a faction to enliven his inordinate gubernatorial ambition, is being hunted by his past. On his own volition, Shittu decided to support the PDP candidate who later won the 2019 gubernatorial election and he openly admitted on a live radio interview programme that he was rewarded for his anti party activities with a brand new Prado Jeep by Engr. Seyi Makinde.

“We are aware that security reports on his inglorious reign at the Ministry of Communications as well as his shameful decision to support PDP candidates in the last year polls cost him another nomination as minister by President Buhari. Up till now, the former minister regularly visits Gov. Seyi Makinde and his Commissioners in the state government Secretariat where he solicits crumps and peanuts as usual.

“However, we are making a passionate appeal to Gov. Makinde to consider floating an Almajiri Welfare Programme for the likes of Shittu who would never be ashamed of living a life of street alm beggar, though in a corporate way, for survival as failure of the governor to do this urgently could lead to frustration and depression for the former minister.” The statement concluded.