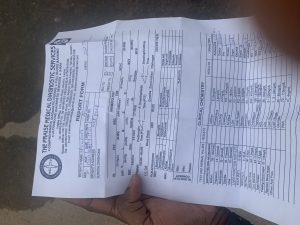 On Thursday 17th April, 2020, Timothy Abijo who was visiting with his cousin at 32, Adetola street Felele, Ibadan lured 13 year old Bimbola into his host’s room, gagged her and raped her. 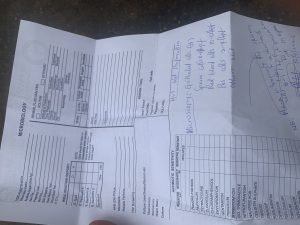 He then gave her a five hundred naira note after warning her not to tell anyone else she will be dealt with.

Before the ordeal, Bimbo was a virgin, She has down syndrome. This implies that she has special needs, she also has issues with her speech.
Bimbo needs help!

Her mother Iyabo, left her at home to go get food for the family to eat. The incident occurred between the hours of 10am and 11am.

Bimbola did not know what had happened to her, she couldn’t explain to her mother when she was found hiding under the stairs crying.

It took physical examination for her mother to realise her daughter had been brutally defiled.

Upon enquiry, she pointed at the room where she was violated and there was Timothy who fled immediately.

It took the swift response of the Felele police station and cooperation of Timothy’s cousin to apprehend him at the toll-gate where he was trying to flee to Lagos where he resides.

Neighbours noted that he might have had company as he was seen with someone else that morning but Timothy claims he carried out the heinous act single handedly.

He is currently in police custody awaiting arraignment. But life, as it is for Bimbola has changed as she is traumatized.

She needs help, this is a call to meaningful members of the public to help in Bimbola’s plight.

No one deserves this inhumane treatment.

As we continue to work with the law enforcement agencies to ensure that justice is equally meted out to Timothy and other criminals like him.