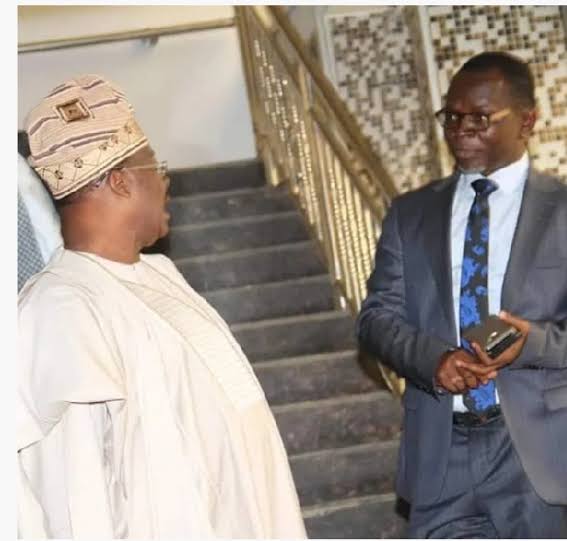 How time flies. Today, Friday, June 25, 2021 makes it exactly a year that my boss, the first and only two term governor of Oyo State, Senator Abiola Ajimobi passed on to eternity.  It is still strange, it still seems like a bad dream. But the reality has dawned. These past 12 months have poignantly brought it home to family, friends, associates and his numerous political menteesthat they had all lost an irreplaceable icon. Every day, the impact of his passage is felt. The vacuum has left a deep crater for his immediate family, his political family in Oyo State and at the National level.

In the State, the lack of a rallying point is poignantly felt in spite of all efforts to knit the different groups together. It has been difficult. But the effort continues. Peace is returning gradually, the reconciliation started before his transition has continued, thanks to his partner of almost 40 years, Dr (Mrs) Florence Ajimobi, who felt since that was his last wish, she owed him the duty of ensuring that wish came to pass. Within the year, the Unity Group with leadership made up of former Minister of Communication, Alhaji Adebayo Shittu, Senator Femi Lanlehin, Senator Ayo Adeseun, Prof Adeolu Akande have all returned to the fold. They took it further with a visit to his widow.

Unknown to many, Senator Ajimobi had paid personal visits to many of the aggrieved people and had resolved the differences with most before his death. As he was fond of saying, if he had offended anyone they should forgive him and for all those who offended him, he had also forgiven them.

Though, his death came unexpectedly -death hardly announced its coming- he had premonitions. He had put his affairs in order before he passed on. He had tried to prepare his immediate family for his passage. On a particular occasion , just before his death, he had taken his wife on a dinner date on the high seas, it was the first time ever in their 40-year old marriage he would ever do that, unknown to her that he was giving her a lasting memory.

His last few days were conducted in service to the people closest to him. The day he left Ibadan for Lagos and eventually Abuja,he had gathered his children and grandchildren for dinner, he had served each and every one at the table. He was giving a lesson in humility and service. He had spoken to those not available. In the night, he had taught his companion of several years how to put on the television in their room, admonishing her that she should learn the task as he would not always be there to do it for her. He had also admonished her to ensure she put off the air conditioner in their room anytime she was going out instead of leaving it for him to do. All very insignificant but quite symbolic because he knew he would not be there forever. But none knew that the parting of ways would be that soon.

A few weeks before his demise, specifically on May 5, 2020, he had gathered his personal staff and associates in the office together, he raised the issue of death and the thereafter.  He wanted everyone to say what they knew, about that subject. Everyone offered different opinions on what they knew and have heard about death and the thereafter.   The former Commissioner for Education, Professor Niyi Olowofela who is presently the representative of Oyo State at the Federal Character Commission had gone to research the subject and recommended a publication entitled– After Lives: A Guide to heaven, hell and Purgatory by John Casey which he said should be given tohim.

Indeed, his life had been an impactful one, he was a sage whose worth is gradually being recognised after death. He was fond of saying that God created a binary world. A world of good and of evil, a world of light and darkness, the good people, the bad people. His words were didactic and his anecdotes were to emphasize his teachings. His last few days were devoted to teaching. He would sit in the office and engage everyone on different issues or the other. And he would conclude, ‘you may not realise it, but you are picking things from me’.

In Oyo State, he made tremendous impact, his strides were gigantic and filling the shoes he left behind becomes harder every day. In the State, today especially with the growing insecurity, the refrain is; ‘this would never have happened in the time of Ajimobi’. ‘Oyo State is gradually returning to the pre-2011 era of do not ply Iwo road or Molete’, all being pointers to the brigandage, arson and wanton disregard for lives and property that characterised the era. In his eight years tenure, no single case of bank robbery was recorded in Oyo State. Civil disobedience were never allowed to thrive. His was a hands-on leadership. He was well prepared for governance and he had a blue print and template of development for 25 years. He would not pamper miscreants and he would not suffer fools gladly. He had informed some top leadership of the Road transport union that he would lock up anyone who caused problem in the State, in the presence of this writer. To ensure adequate security across the State, he established, the popular Operation Burst, a joint Security Task Force with zonal commands of operations in Oyo, Iseyin, Kishi, Ogbomoso, Saki and Eruwa with headquarters in Ibadan. The Ajimobi administration also established a Security Trust Fund, the first in the history of the State which assistedwith the funding of security operations and services across Oyo State. The Oyo State Safe City initiative also came on  stream leading to the establishment of CCTV cameras in strategic locations. Most importantly, Senator Ajimobi established the Oyo State Inter Religious/Inter ethnic committee (SIREC) which helped to entrench religious, inter-ethnic and communal harmony across the State. The effect of this was to ensure a peaceful State, reduction in criminality, a decrease in robbery incidents. What happened was that as a result in 2018, Oyo State earned the honour of being the fifth most peaceful State in the country according to the National Bureau of Statistics (NBS). Under Senator Ajimobi as governor, business thrived with an increase in Direct Foreign Investment (DFI) to the State. Sadly, last year, Oyo State was among the States in the country without any direct foreign investment. There was a renaissance of nighttime economy, hotels, events centres, cinemas, nightclubs increased by 147 percent. Radio Stations were just six in number by the time Ajimobi took over governance in 2011, by the time he left, the State had about 40 radio stations. He also created the Oyo State anthem, among other achievements.

An area where his impact was surely felt was in social and infrastructural renewal. He ensured the dualisation of entry roads into major cities in the State, construction of 183 roads and seven bridges, rehabilitation and maintenance of 850 kilometres of roads. Ibadan, the State capital got a new look with the construction of modern roads. In areas of Housing, the administration was able to establish several housing estates while education got a major boost with strategic policies such as the School Governing Board Policy (SGB) which led to the active participation of all major stakeholders in the administration of public Secondary schools. A few States in the country sent representatives to Oyo State to come and understudy the model. The Ajimobi administration also established a technical university, the first of its kind in Nigeria to provide technical manpower for the society.