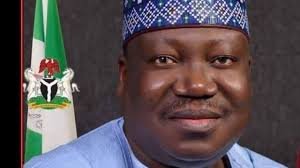 A statement on Monday in Abuja by the National Secretary of the party’s Caretaker/Extraordinary Convention Planning Committee (CECPC), Senator John James Akpan Udoedeghe, said: “On behalf of the CECPC Chairman and Yobe State Governor Mai Mala Buni and teeming members of our great party, we join family, friends, associates, constituents and Federal lawmakers of the Ninth National Assembly in celebrating the President of the Senate and Chairman of the ninth National Assembly, Ahmed Ibrahim Lawan, who turns 62 on January 12, 2021

The APC family celebrates an experienced, cerebral, dexterous and patriotic Federal lawmaker who, as Chairman of the Ninth National Assembly, is enshrining a best practice, particularly in Legislative-Executive relations in Nigeria.

“In partnering with the executive, the Ninth National Assembly under the watch of Ahmed Ibrahim Lawan has chosen to work for public good and national interest.”

Gbajabiamila described Lawan as a worthy partner and dependable ally in the task of nation-building.

In his congratulatory message, he said: “I consider Distinguished Senator Lawan …a democrat and a patriotic Nigerian who believes in delivering good governance to the Nigerian people, using the Legislature.

“I must say that the President of the Senate comes across as a very committed and dedicated lawmaker to the Nigerian project. In the past one and a half years, we have worked harmoniously to take the country forward.

“As you mark your 62nd birthday, I wish you God’s guidance and protection.”

Wase described Lawan as “a conscionable leader and consummate politician” whose leadership has brought changes to the National Assembly.

In a statement by his Chief Press Secretary, Umar Mohammed Puma, the Deputy Speaker said: “Being an astute administrator, ingenious lawmaker, perfect gentleman, patriotic politician and charismatic leader, Senator Lawan has steadied the apex chamber, maintaining mutual respect and collaboration with the other arms of government without compromising the independence of the parliament.”

Lalong, who is the Chairman of Northern Governors’ Forum, described Lawan as an erudite legislator and scholar who has brought his experience to bear on the Nigerian parliament.

In a statement in Jos, the state capital, by his spokesman Dr. Makut Simon Macham, Governor Lalong said Lawan has remained consistent in pursuing the enactment of quality legislations and conduct of robust oversight that have strengthened the nation’s democracy.

He described the Senate President as a worthy partner in the development of the Northern Region and assured him that the governors would continue to work with him in addressing the challenges of the region.