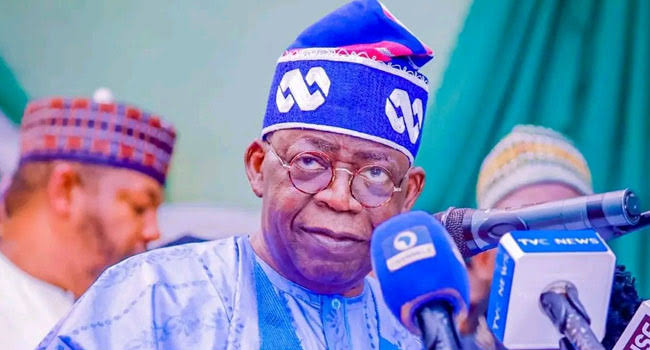 As the present administration begins to wind down after two terms in office, the All Progressives Congress Presidential Candidate, Asiwaju Bola Ahmed Tinubu, has praised the Muhammadu Buhari-led administration for creating lasting legacies for the country.

Tinubu delivered a goodwill message on the second day at the ongoing 3-day ministerial retreat for Ministers and Permanent Secretaries in Abuja on Tuesday.
He said the efforts made by the Buhari administration to set the country on the right path after years of maladministration would never be forgotten by Nigerians even long time after they have left.

Speaking on the theme, “Enhance Security, Fight Corruption, Transform the Economy’, Tinubu expressed
joy that he had been part of the administration’s supporters from Day One.
He praised President Buhari and his cabinet for not disappointing Nigerians who believed in them and gave them the mandate.

“Thank you, President Buhari and may I say thank you on behalf of all Nigerians to your entire administration, represented by all present today. We supported you before your first day in office. I will remain your friend and ally even after your final day at the job.

“I can say this because I know the vision you hold for Nigeria. It is a good and uplifting one. I know the level of patriotic dedication with which you have served this nation. I know the things you have achieved.

“May I say this to you and to your entire team: the things you have done are important and enduring. Try as they might, no one can take those achievements away from you. Yet, it is the fate of the selfless worker to labor too hard and too long to write his own story. He would rather accomplish things for good of all than to focus attention on himself,” he said.

The former Lagos State Governor said despite different challenges the nation and the world at large faced, the Buhari administarion stood tall, building infrastructure, rescuing the nation from its security crisis, passing and signing into law of the Petroleum Industry Act, electoral reforms and putting smiles on the faces of all Nigerians.

“His labor and achievements may go unappreciated for a moment. However, that unfair moment cannot last. In due course, the full extent of his contributions will become known and understood.

“Any objective assessment of your time in office and the national contributions you all have made will be a positive and grateful one.

“This administration inherited a national condition steeped in difficulty unlike any other. Predecessor-governments ignored or lacked the will to tackle serious problems ranging from insecurity to corruption.

“As if that was not enough, you confronted a series of events, unprecedented in the compound severity, complexity and novelty they posed. COVID attacked both global health and the global economy. Throughout most of your tenure, oil prices waned and ebbed and, consequently, so did our revenues.

“The Ukrainian crisis and other conflicts, coupled with severe weather events in many nations further disrupted economic production and undermined international supply chains of critical items, especially food.
You did more than persevere and withstand these adverse storms. Despite it all, you made historic progress.

“Upon entering office, you faced a situation where deadly terrorists were planting flags on our national territory, proclaiming an illegal state within our legitimate state.
Because of your collective work, they no longer plant flags. Their boasts of conquest are no longer heard. You put us on the road to defeating this menace. By the grace of God Himself we shall persist until terrorists and those like them are utterly removed from the face of our nation.

“The progress you made in increasing farm productivity while improving the conditions of the average farmer were important policy interventions, helping the nation overcome the global supply chain disruptions that threated our food security.

“Despite financial headwinds, you embarked on an unparalleled expansion of the national infrastructure.
Work in the power sector is showing dividends amidst increased investor confidence in that area.

“The Petroleum Industry Act (PIA) stands as landmark legislation opening new vistas in the oil and gas sector.
And faithful implementation of the electoral law you passed will further enshrine our democratic way of life through the guarantee of free and fair elections,” he added.

As the tenure winds down, Tinubu said he would be lucky as President, when elected, to be taking over from an administration that has performed greatly, promising to build on the lasting and enduring legacies.

“Rest assured that when the history of the Buhari era is correctly written, the verdict will be that you established a resilient yet deeply anchored foundation while also assembling the building blocks for a durable future of broadly-shared prosperity, peace, diverse growth, security and hope.

“Because of this, I am honored to have been given the baton to follow President Buhari as the standard bearer of our party and, hopefully, as the next president of our federal republic.

“Mr. President and members of his administration, may I state the following:

1. If elected, I will give due honor to your efforts and to your legacy.

2. I will work in the spirit of cordial unity and national purpose that informed the creation of our party and characterized the work of your government.

3. Most importantly, that the ways and means of a Tinubu government will devoted to further protect and prosper the Nigerian people because our guiding principle will be to provide the best of progressive governance and reform to our beloved land. Consider these three promises to a positive outgrowth of your 9-point agenda,” he added.