An explosion was reported earlier this morning at the Explosives Ordinance Disposal (EOD) office in Ado Ekiti.

An initial on-the-spot assessment confirms that there are no casualties and the area is secured with no further threats.

Members of the public are advised to go about their normal duties. 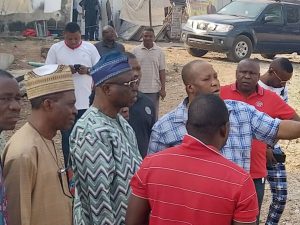 Moments later, the deputy governor of Ekiti state, Bisi Egbeyemi and the Commissioner of Police , Alba Asuquo, were spotted at the Scene of the bomb blast near old governor’s office in Ado-Ekiti.

There were no casualties.