APC House of Representatives’ members from Oyo state have described the appointment as a round peg in a round hole. 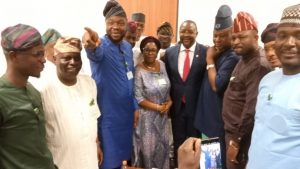 The lawmaker representing ATISBO/ Saki East/Saki West federal constituency, Hon. Jide Olatubosun who spoke on behalf of his colleagues described those who are against the nomination of the former governor as non-members of the party.

According to them, nobody could have filled the position at this important time in the history of the party than Ajimobi.

“We express our unalloyed support for the nomination and appointment of our leader, Sen. Abiola Ajimobi as the deputy national chairman of our great party.

He possesses the leadership needed by our great party and we cannot but say those who nominated him for the post made the right choice.

“This same Sen. Abiola Ajimobi was the one who rallied us. And lo and behold, we were able to take 9 out of 14 available House of Representatives’ seat and 2 out of 3 available senatorial seats.

“While we commend the national leadership of our party for deeming it fit to appoint our leader to man that sensitive position, we will like to advise those who are hellbent on causing problems within the party to have a rethink.

Nobody would deny them entry if they want to rejoin our party but ganging up with outsiders, like they did during the last elections, to cause disaffection within our camp will not be tolerated again.

“If Sen. Abiola Ajimobi hadn’t provided leadership during the troubled times, which party would those causing disunity return to?

“While we congratulate our leader, Sen. Abiola Ajimobi, on his new assignment, we will like to appeal to him to forgive those who might have offended him and the party with the actions and utterances and welcome them back into the party. He has been vindicated,” the statement added.