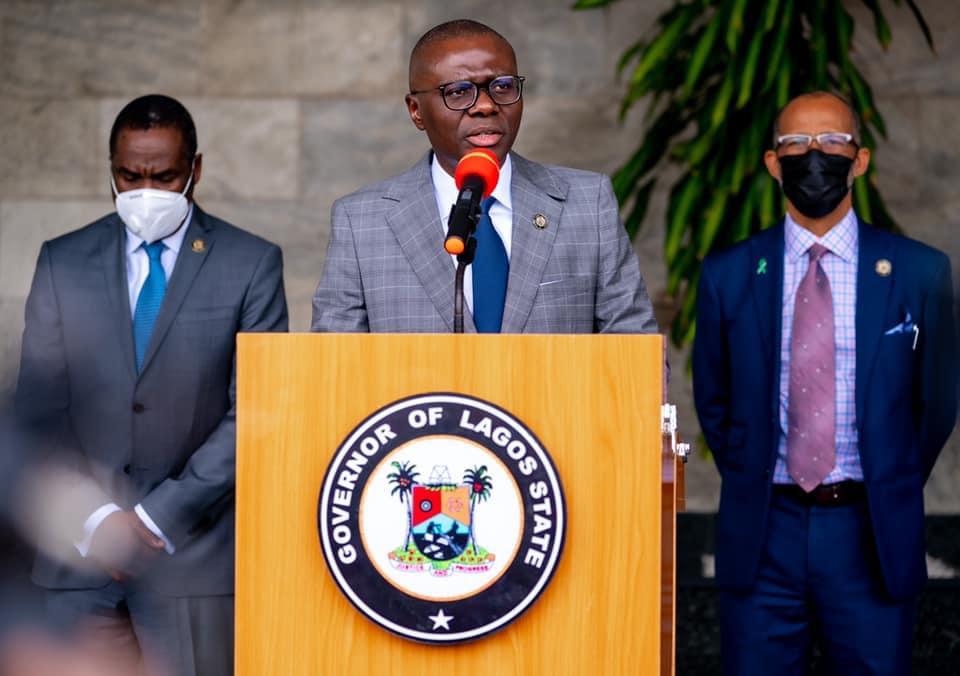 Lagos State Governor, Mr Babajide Sanwo-Olu has confirmed the record of 135 fatalities in the current third wave of the pandemic, highlighting the havoc being wreaked by deadly strains of the virus spreading in the country.

The Governor during a briefing on Monday at the State house, Ikeja revealed that the State has taken the delivery of Moderna vaccine from the Federal Government.

Sanwo-Olu disclosed the State received a little above 300,000 doses of Moderna vaccine to boost the State drive towards achieving herd immunity.

The test positivity rate, the Governor added, has also increased to 12.1 per cent in the past weeks, compared to seven per cent recorded at the end of July, 2021. This, he said, resulted from non-adherence to the laid-down health protocols designed to stop the spread of the pandemic.

Sanwo-Olu said the situation called for more responsibility, urging the residents to adhere to the preventive protocols put in place by the Government.

He said: “We are now clearly in the middle of third wave of the COVID-19 pandemic and Lagos has remained the epicenter of the disease in Nigeria. Test positivity rate currently stands at 12.1 per cent, compared to 1.1 per cent at the end of June, and seven per cent at end of July. As at August 21, 4,387 positive cases are currently being managed actively in-community.

“Over the course of managing the COVID-19 pandemic, about 5,551 patients have been admitted into our various COVID-19 care centres in Lagos, with 506 registered fatalities. Of these deaths, 135 have sadly, happened in this current third wave. I commiserate with all residents who have lost loved ones to the pandemic. We share in your pain and grief. As a society and as a Government, it is for us to redouble our efforts to defeat this devastating pandemic.”

The increment in positive cases, Sanwo-Olu said, has also shot up oxygen demand at the Government-controlled isolation centres, with the State supplying 400 cylinders daily to patients with severe cases.

At the beginning of the third wave, it was learnt that 75 cylinders were consumed per day at the isolation centres.

Sanwo-Olu said the State would be ramping up its oxygen plants in the coming days, as he projected that the demand for oxygen may shoot up in the next few weeks.

From next Wednesday, the Governor said Lagos would start the distribution of the first dose of Moderna vaccine across 150 centres set up in the State for the exercise. Increasing vaccination, the Governor said, will stem cases of fatalities, urging residents to get the vaccine.

He said: “In terms of treatment of severe cases, we have seen a gradual increase in the uptake of oxygen during the current wave. Utilization has increased from 75 cylinders per day at the beginning of this third wave, to over 400 cylinders per day, currently. With our modelling suggesting that we may be requiring even more oxygen supply over the next few weeks, we are exploring several ways of increasing our oxygen capacity.

“One of the major pillars of our mitigation strategy for the third wave is vaccination. We are seeing that countries that have vaccinated a large percentage of their population are recording drastic reductions in the numbers of COVID-19 related deaths. This is one of the reasons why we have not spared any cost to ensure that the vaccines that have been provided by the Federal Government are made available to every resident that meets the requirements for the vaccination programme.”

As part of the strategy to stem the cases, Sanwo-Olu said the State Government identified 5,998 Persons of Interest and had successfully isolated 4,500 of them, most of whom arrived from red-listed countries.