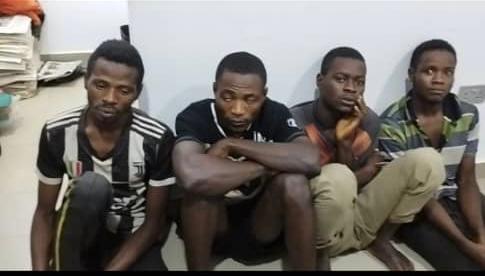 … As Tunji Disu leads the IRT to make critical recoveries of AK47 rifle, other ammunitions

Officers and men of the Inspector-General of Police IRT arrested the suspects after receiving several complaints from residents on the activities of the gang in the locality.

Saleh Musa was the key suspect nabbed by the Police operatives in a raid through actionable intelligence information that he was looking for AK47 rifle to buy in the town.

When interrogated by the Police on why he was looking for the rifle, he named Ibrahim (alias Alhaji) as one of the gang members in their syndicate which were responsible for major robbery and kidnapping operations.

The investigation by the trained Police team also led to the arrest of Miji Yawa Buba who lives at Angwar Yargam in the same community where the rifle was found and recovered by officers of the Force.

In his confessional statement, Manu Saidu said that he conspired with some of his cousins namely Alhaji Bareli Bello, Hussaini Bello and Abdo Baleri, Isa Baleri and Ibrahim Baleri as well as his two younger brothers Yuguda Saidu and Yahaya Saidu (now late) to buy AK 47 for the protection of their cattle’s.

He also said that they bought the rifle from one Baba Mallam at Yelwa for the sum of N300,000.00 (Three Hundred Thousand Naira) adding that it was usually kept at the house of Alhaji Baleri.

On his own part, Saleh Saidu confessed that it was Alhaji Ibrahim Deri that asked him to look for 60 rounds of ammunitions for the rifle at Shendam, saying that they had a good relationship.
He said that he has participated in the armed robbery at a provision store owned by one Alhaji Muntari in Shendam and robbed him of N200,000.00 (Two Hundred Thousand Naira), but denied involvement in any kidnaping.

From Intelligence gathered, the gang were also alleged to have robbed many people in the town and also pharmacy outlets, of which one of the Pharmacist identified as Ibrahim Babawuro in the Shendam community sustained gunshot wounds during the robbery operation.

One of the suspects claimed he only pulled the trigger to test the gun. He denied knowledge of the gang leader Saleh.

However, in his statement, he told the Police team that he is a Cattle rearer and owns a herd of thirty Cattles.

Exhibits recovered from the crime scene include one (1) AK 47 Assualt rifle and some assorted ammunitions.

The Inspector-General of Police IGP Usman Alkali Baba had earlier mandated the Police authorities to mop up all illegal arms and ammunition in circulation in the hands of criminals.

Force Spokesman, CSP Olumuyiwa Adejobi has also assured that the Commander of the Police team, DCP Tunji Disu had been directed by the Police boss to ensure that all arrests in connection with violent crimes are promptly prosecuted in the nation’s law courts to serve as deterrent to other criminals.