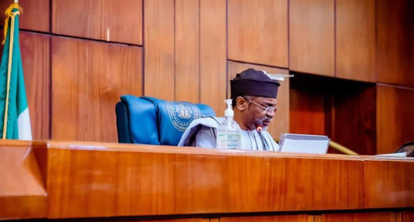 The Speaker, House of Representatives, Hon Femi Gbajabiamila, said on Monday that Nigeria must do everything it can to correct the anomaly in the nation’s gas sector which has left the commodity largely underutilised despite the huge deposit of gas in the country.

Declaring open a public hearing on the ‘Inclusion of Gas Terms in Production Sharing Contracts (PSCs) organised by the Joint House Committee on Gas Resources, Petroleum Resources (Upstream) and Petroleum Resources (Downstream), the Speaker said the nation’s gas sector has the potential to create millions of jobs, bring about industrialisation as well as generate more revenue for the government if properly harnessed.

The Nigerian National Petroleum Corporation (NNPC) has called for a legislative framework with clear fiscal terms to tap the  potential of the gas resources in the deepwater acreages.

The Group Managing Director of NNPC, Mallam Mele Kyari, made the call at a public hearing on “Inclusion of Gas Terms in Production Sharing Contracts (PSCs)” organised by the House of Representatives Joint Committee on Gas Resources, Petroleum Resources (Upstream and Downstream)

In a statement, the Group General Manager, Group Public Affairs Division, Dr. Kennie Obateru, quoted the GMD as saying that investors needed clarity on fiscal terms to be encouraged to commit their capital for gas development projects.

He stated that a functional legislative framework that provides a clear sight on how investors can recoup the capital on investment and make gains is what the Petroleum Industry Bill was all about, adding that the passage of the Bill would help resolve issues of fiscal terms in the Production Sharing Contracts (PSC).

Gbajabiamila spoke just as the Minister of State for Petroleum Resources, Chief Timipre Silva said the government has come to see gas as a very essential resource that can drive the growth of the country and the economy.

Silva said this explain why there is a renewed push for gas, adding that “because of the push that we are championing in the oil industry, gas terms will be fully captured in the PIB when it is passed”.

Gbajabiamila said: “For too long, Nigeria’s natural gas resources have existed almost as an afterthought both as a matter of policymaking and as a focus of investment and exploration. Given the potential of natural gas for industrialisation, job creation and revenue generation for the government, this is a significant error that ought now to be corrected with all urgency.

“It falls to this Joint Committee of the House of Representatives to articulate the way forward and to do so, taking into account the concerns of all the stakeholders and the expectations of the Nigerian people.

“The public hearing we have gathered for today is an important part of the Joint Committee’s assignment. It is also an opportunity for stakeholders from across the oil and gas sector and the country to present information, and contribute ideas that will help the Joint Committee arrive at the proper conclusions and propose effective solutions.

This public hearing ought to have happened and the Joint Committee’s assignment should have been completed long before now. However, we have had to adjust plans and make modifications to accommodate the new realities imposed due to the emergence of the Covid-19 pandemic.”

Silva disclosed that the first Production Sharing Contracts came into operation when the Federal Government decided to encourage the frontier territory in the offshore of Nigeria when most oil exploration was onshore.

According to him, those PSCs have always had some issues since they were signed because the offshore was considered a frontier territory, adding that “today, the offshore of Nigeria is no longer a frontier; it is a proven territory.

“Since then, a lot of discussions have revolved around how we can change the terms. I believe that most of these issues will be cured by the PIB; especially the issues around gas terms, which we all believe were not properly captured in the earlier PSCs. Already, the NNPC is engaged in a lot of discussions around the PSCs and most of those discussions are purely commercial, and they are making good progress.

“But of course, knowing that the PIB is in sight and the National Assembly invited us still for this, we felt that there is a lot of wisdom also, and that is why we have come. I believe that the PIB will be able to cure most of those issues that will come up for discussion today.

“Today, we have come to see gas as a very essential resource that can drive the growth of this country and the economy. That is why you can see this new push for gas. I can assure you that because of the push that we are championing in the oil industry, gas terms will be fully captured in the PIB when it is passed.

“In terms of gas utilisation in the country, we are all aware that in December 2020, we rolled out the Auto Gas initiative which we are actually pushing forward, while a tax force is expected sit on it and come up with details of how we are going to implement the Auto Gas programme, so that Nigerians will begin to use gas for their cars.

“Also in terms of domestic or household gas usage, we are also pushing for penetration because we feel that a lot of usage now is in the cities. So, we want to push for rural people to also begin to utilise gas for cooking. The general idea is to ensure that gas is pushed to the fore in Nigeria. All these that we have discussed will not make sense if the pricing regime for gas is not appropriate.”

Chairman of the Joint Committee and Chairman of the House Committee on Gas Resources, Hon. Nicholas Mutu, said the public hearing was an opportunity to offer practical suggestions for a structured bouquet of incentives that would attract investors to the sector and provide access to finance and profit-sharing.

“This public hearing presents us with another opportunity to offer practical suggestions for a structured bouquet of incentives that would attract investors in the gas sector, provide for access to finance and profit sharing. It is expected that it will also improve the gas pricing mechanism, as well as, cost recovery, and many more, going forward with the PSC. Government monies that have accrued from gas under existing PSCs have to be accounted for.”