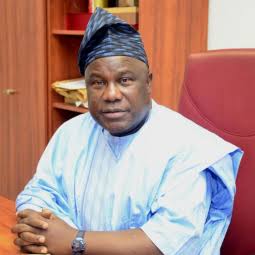 Following the flag-off of five kilometers on Okerete-International Market Road in Saki, Senator Buhari Abdulfatai who facilitated the rehabilitation of the long-abandoned road has charged the Contractor, Bidavile Nigeria Limited to speed up the work and ensure that the desired quality is given in order to have the road that can withstand the test of time.

Senator Buhari made this call in his courtesy visit to the Okere of Sakiland, Oba Surveyor Khalid Oyebisi to inform the monarch and generality of people of Saki about the rehabilitation of 5km on Okerete/International Market commencing very soon.

In the visit that had representative of the company that will handle the work, Engr. Femi Olayinka and that of Federal Ministry of Works, Engr Egunjobi in attendance, Senator Buhari enjoined the contractor to be fast with the work and use quality materials while he added that such gesture will help him in facilitating rehabilitation of more kilometers on the road as soon as possible.

While he declared that getting approval at a stretch for a 94km road is a cumbersome task that will take years before it manifests, Senator Buhari said getting approval in bit by bit is faster and saver to get the road done.

“I will be very happy if this project is done within the shortest time so that I can do follow up for additional kilometers so that by the time we enter next year, the work on the road must have gone far beyond the expectation of people of Saki, by the grace of God” Senator Buhari stated.

He explained that the conceptualization to work on the road started when he accompanied his late Leader and former Governor of Oyo State, Abiola Ajimobi to Okerete International Market where in they experienced a lot of difficulties before they got there.

Senator Buhari stated that with the potentials of the market, it will naturally open itself for various opportunities capable of turning the lives of people of Saki to a better one only if accessible road is provided.

While disclosing that he was well pleased with quality jobs done on the three earlier road at Iseyin, Ogbomoso and Agunrege, Senator Buhari warned the contractor against any form of shady job stressing that he will only sign for the company to have its money only if standard job is done.

Senator Buhari pledged to sustain quality representation aimed at bringing appreciative dividends of democracy to every nook and cranny of Oyo North without fear or favour.

In his address, Okere of Sakiland, Oba Surv. Khalid Olabisi thanked Senator Buhari for his concern for Saki and for making the dream of rehabilitating the road, a reality.

He called on the contractor to commence the work immediately and make sure good jobs are done as Saki Community will be ready to give the project the deserved monitoring.

In his appreciation message to Senator Buhari for the love and passionate moves to develop Saki, The President, Saki Parapo, Elder Festus Adejumobi lauded the lawmaker for his unrelenting efforts that brought about the rehabilitation of 5km on Okerete Road.

“It was a good move and we all appreciated this. It is now an on-going project. We pray that Federal government through Senator Buhari completed the road project so that it can open the economic opportunities to Sakiland,” Elder Adejumobi said.

In the remarks of Bagi of Sakiland, High Chief AbdulRasheed Gazali Adegoke, the antecedence of Senator Buhari has confirmed that he is a man of his words while he used the occasion to appeal to politicians to show sincere interest in the growth and development of Sakiland.

“Anybody that sees us in Saki, we shall see the person too as 2023 general elections draw nearer! Anybody who does not see us, when the time comes, we shall also reject the person,” Bagi stressed.

He also charged the contractor to do a good job so that a solid foundation will be laid for further works on the road.

Chief Adegoke prayed for Senator Buhari to succeed in all his endeavour.

Previous Posts Statement of Gbajabiamila ON THE RESOLUTION OF OUTSTANDING ISSUES BETWEEN ASUU and FG
Next Posts Oyo 2023: Group Dumps Makinde, pledges Support For Adelabu.