The flurry of activities lately by this administration signalling their intention to complete the Lagos Blue Line Light Rail System stimulated the writer’s interest to investigate and assess the level of completion of the project. 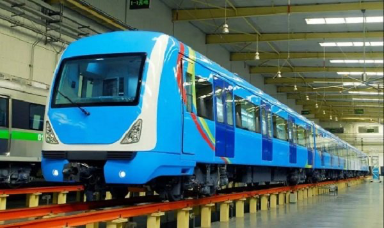 Transportation, being the first and major pillar of Governor Babajide Sanwo-Olu’s THEMES programme for the development of the state, underscores the need to fast-track the completion of the Blue Line project, which will help in actualising the objective of their programme.

The sum of N153 billion was approved by the Lagos State House of  Assembly to complete the scheme which is billed to become operational by year 2021, as announced by the Lagos Metropolitan Area Transport Authority (LAMATA)’s  managing director and also confirmed by Governor Sanwoolu. This affirmation gives credence to the fact that the Blue Line will be commissioned within the first term of this administration. This is cheery news and indeed a delight.

There was a ceremony to commemorate the completion of the last pillar of the sea-crossing beam of the first phase of the work. This is a 380-metre-long beam that stretches across the entire length of the path that traverses the Lagos lagoon.

The Blue Line Light Rail evokes a lot of expectations, particularly when it is compared with the transformation witnessed in the Dubai metropolis with the completion of the first phase of Dubai Metro. The Pretoria to Johannesburg Metro Line equally transformed significantly the corridor through which the trains transverse.

The 27-kilometre Lagos Blue Line is complemented along its major route with a world-class-designed and executed 10-lane highway between the National Theatre which has one of the major hubs and Okokomaiko at the other end.

At least, four of the elevated stations have been completed and a number of pedestrian and vehicular overhead bridges have equally been constructed along this 27-kilometre stretch to aid easy commuting.

It is expected that with this prestigious and high profile project will translate to improving the ambience of the corridor and attract high profile investments in the real estate and commercial businesses. However, a very disturbing phenomenon observed, which is fast becoming a norm in our construction etiquette, is the lack of maintenance/housekeeping of the construction corridor. The entire corridor is sadly in a disbelieving state. The corridor is riddled with filth, stench and squalor. The roads, which are hardly maintained, are flanked by overgrown weeds, and refuse heaps litter all across the corridor.

The rail lines and the built stations are getting dilapidated for lack of use, whilst the nicely built road networks are also experiencing decay. The question many are asking is: considering the fact that this project is in phases, and since Phases 2 and 3 are fully completed (Mile 2 to National Theatre), could the completed part not be put to use to convey commuters from Mile 2 to the National Theatre? This will bring huge economic returns to the state. Hundreds of thousands of passengers throng these areas on motorcycles and other commercial buses at the moment, and these are people who will gladly use the facilities.

For the Blue Line Rail System to be a success, and considering the fact that it will become operational within a year or two from now, it behoves the government to embark on the following measures immediately:

Attention needs to be given to the sanitary condition of the entire corridor. The corridor should be cleaned up, and be rid of filth and refuse. A beautification exercise should be carried out in terms of soft landscape and trees to adorn the corridor.

This is the time to enforce the control of human traffic and limit pedestrians to the use of the pedestrian bridges provided. Pedestrians who are currently used to crossing indiscriminately at all sections of the railway corridor should be seriously discouraged from doing so.

It is very disheartening to see vehicles and motor cycles going the wrong way or against traffic with impunity. This needs to be curbed at this time before it becomes a culture. Lots of informal markets and commercial activities have sprung up on both sides of the corridor, thus distorting the actual plans of the areas. These should be checked now as they encourage increased human movements along the rail lines and at dangerous points.

Studies should be carried out at this time to determine the appropriate model places along the corridor to establish commercial centres. This will give more sanity to the place and improve on vehicular and pedestrian movements.

A very robust and conscious maintenance regime should be established for the maintenance of all the infrastructure provided. This should include the drains, the rails, the roads, the pedestrian walkways, the street lights, the bus shelters, the train stations and all other components of the scheme.

The government needs to ensure from the outset that all the lanes on the highways are clearly marked and adequate traffic signs are put in appropriate places. This will ensure orderliness and sanity on our roads.

This is the time for the Lagos State Signage and Advertisement Agency (LASAA) to come in and put a structure to the process of installing billboards and adverts along the corridor. Properly located billboards will add some ambience to this corridor.

It is important to stress at this point the huge economic returns that can be realised if the stretch from Mile 2 to the National Theatre becomes operational. It will stimulate a lot of activities along the axis. The National Theatre, being a major hub, will spring back to life as the presence of large number of commuters will trigger businesses and entertainment activities at this hub. The dilapidations of all the stations will also be stemmed.

Finally, all efforts to complete the stretch from the National Theatre to Marina within the shortest time should be rigorously pursued. Here is hoping that all hands will be on deck to complete this scheme and equally begin the Red Line construction so that its economic benefits can be fully realised, whilst at the same time easing the transportation problem in Lagos and launching our dear state into the league of cities with efficient mass transit systems.