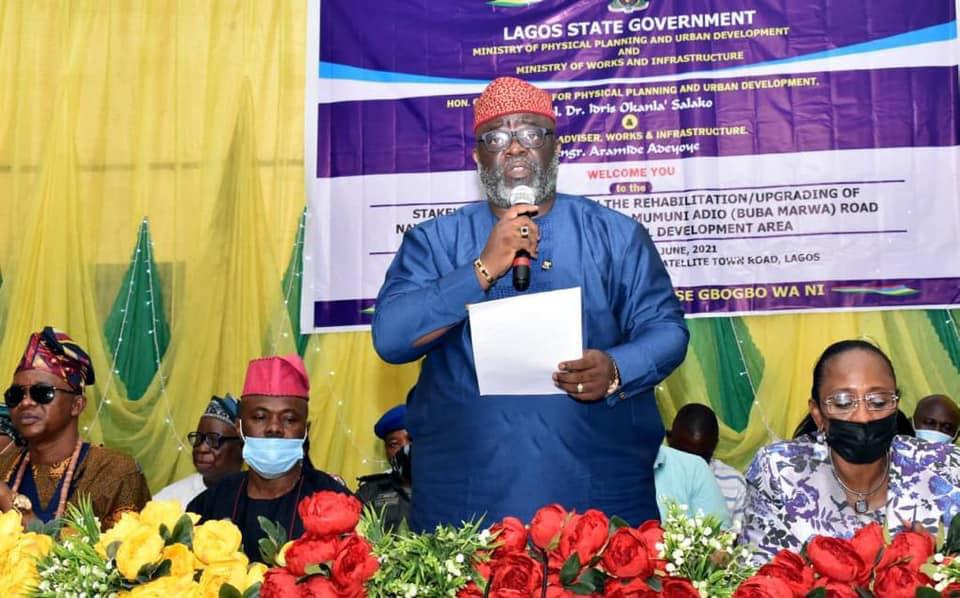 The Lagos State Government has assured residents of Satellite Town in Oriade Local Council Development Area of the speedy delivery of the Right of Way  and timely completion of Navy Town( Section 1) Road and Mumuni Adio Road.

This was contained in the Adress of the Commissioner for Physical Planning and Urban Development, Dr. Idris Salako during the Stakeholders’ meeting with beneficiaries of the road projects in Oriade Local Council Development Area Secretariat on Tuesday.

Whilst explaining the essence of the delivery of Right of Way for road projects, Salako noted that ” the site must be delivered, free of all encumbrances for road development projects to be possible”.

He said that the Ministry of Physical Planning and Urban Development, as the custodians of the State Operative Development Plans, was saddled with the onerous task of facilitating the development of the State by establishing and delivering the Right of Way for all State Government projects.

To bring about smooth, timely and successful delivery of the road projects, the Commissioner disclosed that operatives of the Ministry would be visiting the localities to serve statutory notices and subsequently remove all forms of encumbrances on the Right of Way of Navy Town and Mumuni Adio Roads.

He called for the cooperation of residents of the communities at every stage of the projects, while assuring them of Government’s ” unending resolve to always lessen the effect of the removal of encroaching structures by giving due considerations to compensations where necessary”.

Earlier, the Special Adviser, Works and Infrastructure, Engr. Aramide Adeyoye had, in her remark, urged the benefiting communities to cooperate for the smooth execution of the projects by forging a sense of ownership and protecting the roads so as to reap maximum benefit of interconnectivity, increase in property value and aesthetics of the environment among others.

She added that the roads, which were awarded this May for the duration of 15 months, would, upon completion, have modern facilities like streetlights, service ducts, bus shelter and weigh bridges among others.

She said that the Government of Mr. Babajide Olusola Sanwo-Olu remained faithful to the T.H.E.M.E.S Agenda as indicated by the accelerated pace of developing the State through the construction of roads and provision of other infrastructure.

Also joining in commending the road projects to the people of Oriade Local Council Development Area were The Special Adviser to the Governor on Urban Development, Ganiyu Adele Ayuba, Honourable Member of the Lagos State House Assembly, Hon. Rauf Age-Sulaimon and the Permanent Secretary, Office of infrastructure, Engr.Rotimi Thomas.