Shittu belongs to the past in APC, youth leader fires ex-minister

Shittu belongs to the past in APC, youth leader fires ex-minister 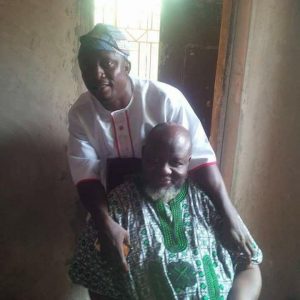 Oyo North senatorial district youth leader of the All Progressives Congress in Oyo State, Mr. Dauda Ajana, has stated that no individual would lose sleep over alleged persistent attacks against the APC and its leaders from Barrister Adebayo Shittu “because the former minister of communications exists only in the history of the party”.

The ex-minister has always been at loggerheads with the leadership of the Oyo APC as this climaxed in May 2018 when he joined forces with other aggrieved members to float a factional group named Unity Forum with a view to dislodging the then Governor Abiola Ajimobi as the leader of the APC in the state.

Speaking with our correspondent on a phone conversation at the weekend, Ajana said the ex-minister has ceased to be a member of Oyo APC since his faction broke away in 2018 while he (Shittu) also went ahead to work against all the candidates fielded by the party in the 2019 general election.

His words; “It does not bother us in Oyo APC if former minister Shittu now struggles to outdo media experts hired by the PDP government to launder the image of Gov. Seyi Makinde. Apart from the fact he (Shittu) and few other gladiators failed in their bid to hijack the party in 2018 for selfish reasons, the Saki-born lawyer had always been everything but blessing to our party in the state.

“He claimed to have stayed put in the party when his co-travelers in Unity Forum defected to other parties only to play a cog in the wheel of progress. He never worked for the reelection of President Buhari and this, coupled with his disgraceful performance as a minister for over three years, was largely responsible for his failure to be reappointed. Mr. President has all the facts and he chose not to reward emptiness and hypocrisy with any appointment again.

“How can a reasonable person claim to be a member of a particular party and he would have nothing doing with members and leadership of the same party in his Ward, Local Government Area and state levels for over two years? The only time he identified with Oyo APC was in 2016 when he donated two rickety buses and the same buses have since been abandoned because they were unserviceable vehicles.

“It is on record that Shittu was involved in virtually all the meetings of the coalition groups which worked in favour of Engr. Seyi Makinde of the PDP to win the last gubernatorial election in the state. Having been mobilized with some goodies, he now feels he deserves more patronage and this may be responsible for his renewed efforts to fight the cause of the governor to the detriment of our party but all of them have failed.

“With a member like him (Shittu) playing major role in any political party, such party cannot make a headway and I’m aware that some stakeholders within the APC in his Ward 02, Saki West local government are meeting to address the issue of false claim of membership of Oyo APC coming from him. As far as we are concerned in Oke-Ogun axis of the state, former minister Shittu is not a member of the APC and we stand by this assertion.” Ajana stated.