THE CLOUDS WILL GIVE WAY TO A NEW NIGERIA, SAYS OSINBAJO AT NATIONAL PRAYER BREAKFAST

THE CLOUDS WILL GIVE WAY TO A NEW NIGERIA, SAYS OSINBAJO AT NATIONAL PRAYER BREAKFAST

*VP joins Gen. Gowon, CAN President, others in Abuja to speak life to the nation 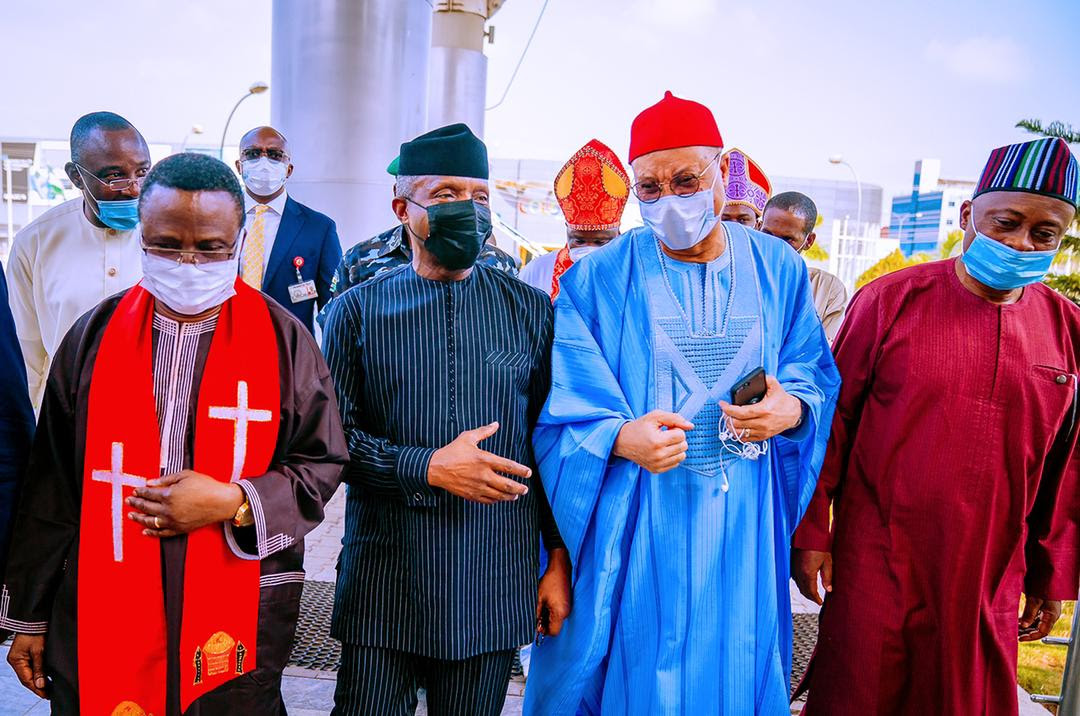 A new Nigeria is in the making, but it is currently covered by the clouds and travails which will certainly give way to a glorious and bright new morn of a new nation, according to Vice President Yemi Osinbajo, SAN.

He spoke this morning at the National Prayer Breakfast, which held at the NAF Conference Centre, Kado, Abuja. 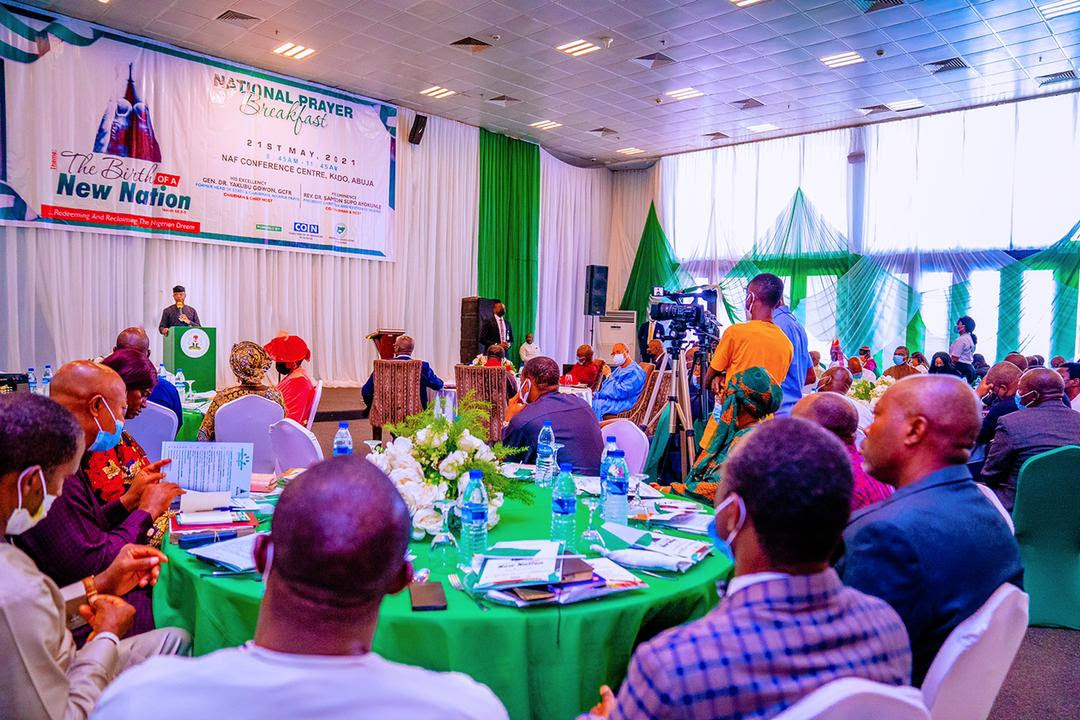 According to Prof. Osinbajo, “the new nation is birthing already. It is covered by a cloud, but the cloud will pass, and God Almighty will take all of the glory for the birthing of a new nation.”

While he noted that the theme of the Prayer breakfast, the “Birth of a New Nation”, was significant, especially in these times, the Vice President emphasized the need for collective prayers, faith, hope and action, adding that Nigeria would prevail over the challenges of today. 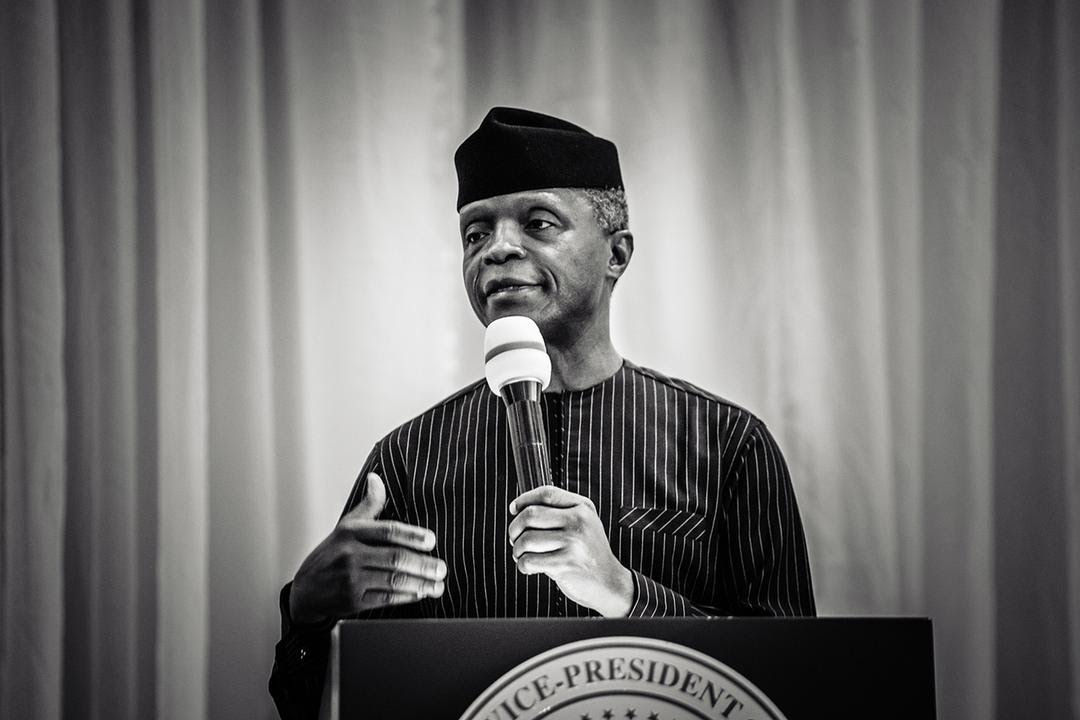 He said today’s National Prayer Breakfast “comes at a time of great travail and tribulation for the nation: in the throes of a pandemic for well over a year, leading to a severe economic downturn, loss of jobs and livelihoods; and as we climbed out of the recession, we have been faced with an unprecedented scale of insecurity, in different zones of the nation.

“But we know that every time that a nation where the lives of the children of God is challenged, it is God’s call to His people to take action. It is an opportunity for God to demonstrate that He is God over the nations, that He is the creator of the heavens and the earth, that He knows the beginning from the end. But God also wants us to know that He has ordained us to speak to life.”

Referencing the Holy Book, Prof. Osinbajo recalled the work and prophetic actions of men and women of faith who played vital roles in nation-building during biblical times.

“So, the Scripture has consistently shown us that children of God are central to the birth of a new nation, the rebirth of nations. They must desire the change, cry to God, be ready to make the sacrifice of repentance,” he said.

Describing the people of God as the salt of the earth, the Vice President said, “As we are the salt, we are also the light, the light ends the darkness; it marks the end of the night of weeping and marks the glorious sunlight of the morning of joy. So, the pouring of the salt into the source of the water, the source of the problem, is the prophetic act we perform today,

He referenced 2 Kings 2:19-22, and said, “we, the salt, are also poured today by prayer and prophecy, to the source of our nation’s problems. And as we pray and prophesy, a new nation will be birthed; one where, like the city to which Elisha went, the land was healed, the people prospered and peace and joy prevailed.”

Prof. Osinbajo thanked the organisers, as well as the Christian Association of Nigeria (CAN), and former Head of State, Gen. Yakubu Gowon (retd.) whom he described as the “father of the Nigerian Prays movement.”

In the same vein, the Vice President commended Gen. Gowon “for his commitment and dedication to this nation from his youth, when he was Head of State, when he led the fight to keep Nigeria one, to his later years as an elder statesman where his well-seasoned words uttered in Godly wisdom have counselled our nation’s leaders for decades.”

The Vice President joined Gen. Gowon; CAN President, Dr. Samson Ayokunle, among other dignitaries who attended the meeting.