We must fix local govts to deliver democratic promises | Gbajabiamila

We must fix local govts to deliver democratic promises | Gbajabiamila 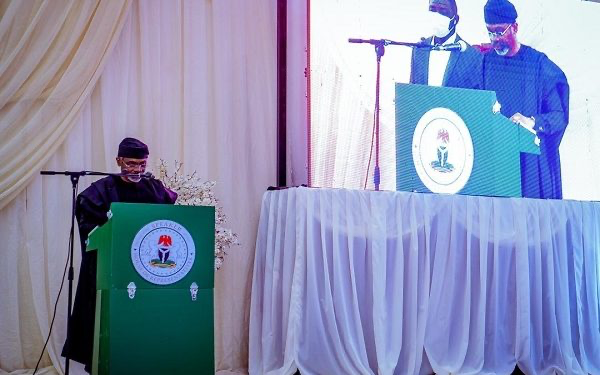 The Speaker said it was time for all efforts to be channelled toward addressing the problems bedeviling the local government system in the country to make it more efficient and effective, adding that for leaders to deliver on the promise of democratic governance, the local government administration must be fixed to meet its expectations.

Speaking at the 2021 General Assembly meeting of the Association of Local Governments of Nigeria (ALGON), the Speaker said the House of Representatives was ready to assist in making the local governments in Nigeria better through the instrument of the law.

He said: “The local government administrations in Nigeria are the closest to the people. They should be responsible for making decisions and providing services that ensure the quality of life for the Nigerian

“This is the most critical and most important tier of government because you are the ones that are in touch with the people of Nigeria, I thought I have to be here irrespective of my tight schedule.

“I was pleased to see that you have chosen as the theme of this year’s General Assembly ‘Strategic Positioning of Local Governments for the Future: A New Era.’ This is an important topic that I hope will allow the General Assembly to develop a strategy that will enable stakeholders across government and civil society to collaborate more effectively to achieve necessary and long-overdue reforms of local government administration in Nigeria.”

According to him, the major task of the local governments was development at the grassroots level but bemoaned a situation where members of the National Assembly like him were called upon by the people at that level to carry out work to be done by that tier of government.

The Speaker said though it was the responsibility of the local governments to carry out such works, they could not do that, “because they have been hampered to do that. We all know why this happens. That is why I say you should make the outcomes of this assembly rich. And we will be there in the National Assembly to assist you.”

The Speaker said further that now that there is a public and political consensus in favour of constitutional reforms to address the fundamental and structural problems in the country, “this is the time to ensure that the question of how to get our local governments working is at the centre of our national conversations about the future and promise of Nigeria.

“It is said that you cannot build something on nothing. If you don’t fix the local government administration, you will just go round and round.”

He assured that the ongoing constitution amendment by the National Assembly would address some of the challenges faced in the country, saying: “Local government leaders must at all times strive towards a culture of service and the practice of excellence.

You must respect the rule of law. Part of that means ensuring that the legislative arm of local government administration performs its separate functions without undue Executive interference.

“For too long, we have avoided the hard conversations about our nation’s future. We cannot afford to do that anymore. I assure you all that the Ninth House of Representatives will not waiver from our commitment to take whatever legislative actions are necessary to achieve the highest ambitions we have for Nigeria.

“I assure you also that we are ready to work with the Association of Local Governments of Nigeria (ALGON) and all stakeholders to fix local government administration in Nigeria once and for all.”